Exploring Grief in Josephine Decker’s ‘The Sky is Everywhere’

What is grief? A deep sorrow. A sharp pain. A keenly felt distress over a loss or affliction. All are true, though they ring a touch vague and disinterested. They are, of course, textbook definitions.

Looking at grief through an objective lens can prove useful in developing a fundamental understanding of the feeling. However, it lacks the specificity that we as humans so crave in order to find familiarity in that feeling, to live in it.

Nobody knows how to live in their grief better than young “Lennie Walker” (Grace Kaufman). She dives into it as if it were a pool, and meanders from room to room as if it were a house. Lennie has just lost her older sister, her best friend, her other half, the Heathcliff to her Cathy, “Bailey” (Havana Rose Liu), to a fatal heart arrhythmia.

Based on Jandy Nelson’s 2010 young adult novel of the same name, The Sky is Everywhere (2022) tells the story of Lennie and her family as they try to come to terms with Bailey’s death. Desperate to feel close to her sister after her passing, and frustrated by what she feels to be a lack of understanding from those around her, she begins to spend more time with Bailey’s former fiancé, “Toby” (Pico Alexander), who shares her grief. But just as the bud of a (rather complicated) romantic relationship begins to bloom, Lennie finds herself falling for the new boy in town named “Joe Fontaine” (Jacques Colimon).

Music is Woven into the Fabric of the Film

While Toby shares Lennie’s grief and loss, Joe shares her love for music. A musical prodigy who plays a mean clarinet, Lennie had big plans for her life – and Bailey’s. The two had agreed to attend Julliard together (assuming they could both get in, of course), Lennie for clarinet and Bailey for theater. Now, with her sister gone, Lennie’s lilting clarinet song has dwindled to a small, sad whine; she can barely hold a note.

Lennie may have lost her passion for the clarinet, but its melody still plays throughout the film. As much as Lennie might wish for her grief to drown out the taunting tune, music is as much a part of her life as it has always been, and Joe (a skilled guitarist and trumpet player himself), recognizes this. He acknowledges Lennie’s hurt, but encourages her to keep playing – his song bringing out her own. When I spoke with director Josephine Decker, she likened Joe to “light and the sun,” an agent of nature, of positivity.

If Joe is sunshine, then Lennie is the forest ready to drink in its rays and glow in its light. In fact, much of the film plays out in the forest, among the towering, enchanted California redwoods. It isn’t just the music of a clarinet or guitar that skates from ear to ear, but the song of nature itself.

As Lennie wanders from tree to tree, the very forest floor seems to creak and squeak like rickety floorboards beneath her feet. Wind chimes tinkle as she embraces Toby in a hug. Roses from grandma’s garden send their whispers along the air as she and Joe lay beneath their petals, silently communing through the aria Lennie plays on her phone for Joe.

With nature as their stage and music as their conductor, emotions – raw and powerful – rule this film and those of us watching it. Joe and Lennie’s rose garden experience is more than just an exchange of feelings – it is a merging of two spirits into one, an almost orgasmic union. Astonished, Joe remarks to Lennie, “I felt like I was listening to it [the music] through you. Did we just have sex?”

When the pair feel love, the very sky seems boundless and bright. When they experience joy, they dance with airy abandon and freedom. When Lennie cries, she wails, the clouds turning gray and heavy with rain. The very weather changes with their moods, a tool often used in old melodramas like Written on the Wind (1956), though Josephine Decker less melodramatic and more whimsical.

And when Lennie feels grief? She rages. “Grief is a house where no one can protect you…” Pieces of furniture crash down from the sky as she tears through the forest. “…where the younger sister will grow older than the older one…” The wind is howling, the creaking of the wood sharp and ominous. “…where the doors no longer let you in or out.”

The forest is Lennie’s safehouse, a place where she can throw herself against the walls and allow herself to feel her agonizing grief. Here, Josephine Decker lets Lennie let loose, lets her be messy and reckless and angry and sad. So by the time Lennie comes to the conclusion that “grief is forever, isn’t it,” there is no anger or spite or even resignation.

In the end, there is clarity, acceptance, and the understanding that this feeling may never go away. But Lennie will go on regardless, with sadness, yes, but also with joy and love. 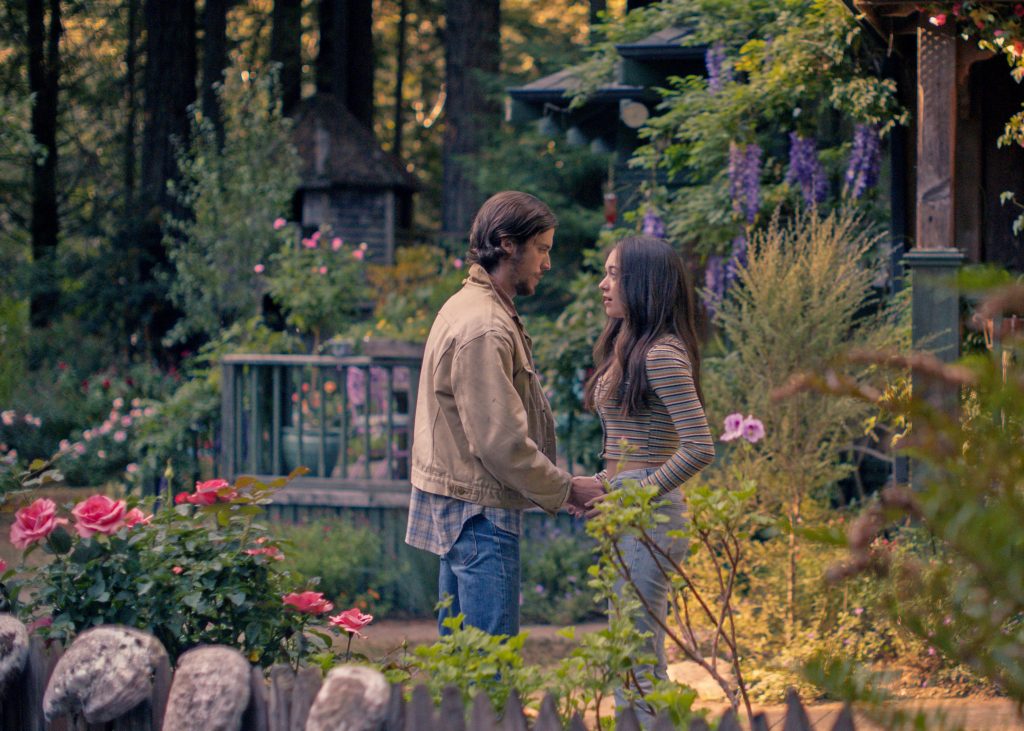 In ‘Hysteria’ and ‘Buffaloed,’ Tanya Wexler takes a comedic blow to gender dynamics

by Roza Melkumyan March 11, 2022
As a member of the FF2 Media team, Roza writes features and reviews and coaches other associates and interns. She joined the team as an intern during her third year of study at New York University. There she individualized her major and studied narrative through a cultural lens and in the mediums of literature, theatre, and film. At school, Roza studied abroad in Florence and London, worked as a Resident Assistant, and workshopped a play she wrote and co-directed. After graduating, she spent six months in Spain teaching English and practicing her Spanish. In 2019, she spent a year in Armenia teaching university English as a Fulbright scholar. She has continued to live in Armenia, and loves every second of it. Her love of film has only grown over the years, and she is dedicated to providing the space necessary for female filmmakers to prosper.
Previous Post Next Post