Jennifer Sperry Steinorth on Erasing to Find the Hidden New

Last Fall, I traveled to Youngstown State University to attend LitYoungtown, a small, yet mighty literary festival in Ohio. While there I took a workshop led by poet Jennifer Sperry Steinorth on the poetic form of “erasure.” She taught us about the history of erasure poetry: erasure is a form of found poetry that’s created by erasing words from an existing text and using the remaining words on each page to “write” a poem — and she gave us a number of examples. Jennifer also showed us how she created her own work, talking us through her methods for creating erasures through multiple iterations.

Jennifer’s erasure project was done on a book that she’d found at a garage sale called The Meaning of Art by Herbert Read. (From Amazon: “a classic of its kind” which supposedly “provides a basis for the appreciation of paintings, sculpture and art-objects of all periods,” but doesn’t include the work of a single woman artist).  From this, Jennifer drew her own book: Her Read, a graphic poem (the title of which erases parts of the name Herbert Read). 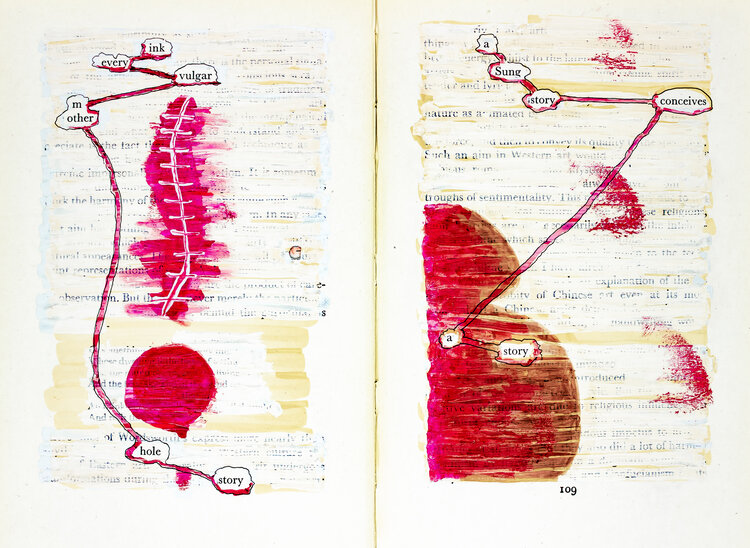 As I sat there listening to Jennifer, an idea popped into my head: What if I were to integrate Jennifer’s erasure method into my own process as I worked on my new biography of Sanora Babb? More on that later…

Meanwhile, I recently had a chance to catch up with Jennifer to ask her a few questions about her erasure method.

IJD: What made you turn toward writing an erasure of  The Meaning of Art by Herbert Read?

Jennifer Sperry Steinorth: For some time, I’d wanted to try my hand at a book-length erasure, but in the summer of 2016, a tangle of forces drew me to the violence of the form.

I don’t know that my book Her Read will change any minds, but I think erasure is a uniquely dialogic space. It assumes a multiplicity of voices, even if the words you erase are your own.

In being so intimately in dialogue with — and dependent on — the voices from the past, does erasure (as a poetic method) also presume dialogue with new voices in the future? Does erasure hold space for that? I hope so.

IJD: How many times did you erase the text The Meaning of Art by Herbert Read?

I’ve set up a page on my website where you can see several of the pages and how they change across the three drafts.

I made myself complete the whole book in a single volume before beginning a second draft.

I completed the first book in April of 2020. The spine had fallen off my copy of my working copy of The Meaning of Art, and the pages were messier than I wanted.

In the second draft, I took the opportunity to play more visually and rework the language on a couple of pages that didn’t feel right. I mailed the second book to my editor.

But then I needed to remake some pages, and I ended up making a whole third book, which turned out better than the second.

The third book is the one I photographed and processed.

IJD: Which erasure poems do you recommend?

Jennifer Sperry Steinorth: I tend to be most interested in erasure that is documentary — which often means it is working to dis-cover what hegemonies have buried, decimated, erased.

There are so many great erasures coming out, so it’s really hard to single them out But one that I haven’t seen discussed very much is Chase Berggrun’s RED, which is the erasure of Bram Stoker’s Dracula.

Here is Amazon’s description of The Meaning of Art according to Herbert Read (originally published in 1931). “A compact survey of the world’s art, from primitive cave-drawings to Jackson Pollock, The Meaning of Art explains the persistence of certain principles and aspirations throughout the history of art, and summarizes the essence of such movements as Gothic, Baroque, Impressionism, Expressionism and Surrealism.” 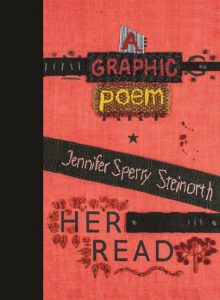 And this is the webpage description of Her Read: A Graphic Poem on the Texas A&M University Press site: “Her Read: A Graphic Poem is a hybrid text at once poetry and visual art. In the tradition of reusing canvases, Steinorth takes a seminal text, The Meaning of Art by Herbert Read and with the liberal use of correction fluid, scalpel and embroidery floss, transforms the book from art criticism into feminist verse. Though the maternal body appears with frequency in Read’s illustrated text which spans from prehistory to the modern age, he includes zero female artists. Her Read: A Graphic Poem is an excavation of buried voices, a reclamation of bodies framed in gilt and an homage to those whose arts remain unsung.”

Click HERE to learn more about Chase Berggrun’s RED (“R E D excavates from Bram Stoker’s Dracula, through the process of erasure, an original narrative of violence, sexual abuse, power dynamics, vengeance, and feminist rage, and wrestles with the complexities of gender, transition, and monsterhood.”) The webpage includes a two poem sampling along with order information.

Photo of Jennifer Sperry Steinorth taken by Iris Jamahl Dunkle at LitYoungstown on October 8, 2021. Authorized for responsible use as long as a link to this webpage is provided.

by Iris Dunkle January 4, 2022
Iris Jamahl Dunkle is an award-winning literary biographer, essayist, and poet who lives in Northern California. She wrote the first full-length biography on Charmian London, Jack London's wife, Charmian Kittredge London: Trailblazer, Author, Adventurer (University of Oklahoma Press, 2020). Her fourth collection of poems, West : Fire : Archive was published by The Center for Literary Publishing in 2021. Dunkle teaches at Napa Valley College and is the Poetry and Translation Director of the Napa Valley Writers' Conference and is currently writing a full length biography of the author Sanora Babb.
Previous Post Next Post