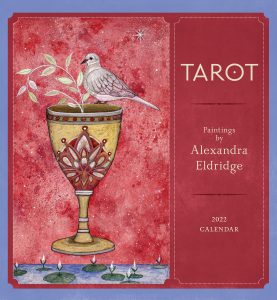 This holiday season, we’re excited to introduce Pomegranate, a publishing and printing company that offers its customers “art you can bring home.”

In celebration of Pomegranate’s commitment to inclusivity, we’re proud to spotlight some of the brilliant women artists in their catalogue! Read more about Pomegranate below.

“Symbols are the language of the soul.” The sentiment, so simply stated, strikes me with its absolute truth. I’ve just sat down to a virtual chat with artist Alexandra Eldridge, who seeks “the extraordinary in the ordinary” through her artwork.

A celebration of natural beauty, creativity, and divine femininity, Alexandra’s work is layered with symbolism and human-animal imagery. “I’m really interested in soul work – going deep into the unconscious and bringing out what symbolic forms exist.” With such a strong connection to her own inner psyche, Alexandra has spent her life mapping her soul’s journey through her art.

I first saw Alexandra’s work while scanning the product pages of Pomegranate. In a calendar featuring works from her newly released tarot card series The Radiant Tarot: Pathway to Creativity, I was drawn into her strange yet vibrant and textured world of the occult, where the Devil has the head of a peering antelope and the body of a man, where an Emperor is a stag with a crown and a throne, and where an Empress lounges upon her chaise behind a giant Venus flytrap (while a huge rabbit stands guard).

After studying this small but wonderful 12-month sampling from the 78-card deck, I was eager to ask Alexandra more about her recently finished project.

She told me she had actually begun working on The Radiant Tarot for 12 years prior to its November 2021 release. An English and poetry professor who’d seen her work asked if she would consider creating artwork for a tarot deck, so she set to work painting the Major Arcana — the 22 trump cards — of the set. “I’ve always worked in the symbolic archetypal realms, so this was a continuation of my vision.”

But it wasn’t until Jane Lahr (an agent in New York) saw Alexandra’s paintings posted on Facebook that the notion of a published tarot deck became possible. Jane wrote the astrology for the tarot and, after a long search, the pair was able to engage the right publisher — Redwheel/Weiser — which had been in the occult business since 1957. By March 2020, a deal was struck and Alexandra was given six months to finish another 50 designs for the Minor Arcana. . . which meant painting for around four to six hours a day! “I was in a trance. It was a wonderful experience.”

Alexandra hardly anticipated the press that came with the release, having never painted for commercial work of her own before. Prior to The Radiant Tarot, she had been known primarily as a book cover designer; authors asked to feature her artwork on the covers of their books (25 book covers, to be exact). With the release of her Tarot calendar for Pomegranate, followed by the tarot deck release, her work instantly became more visible and more accessible to the public.

After working so closely with tarot as an artist, Alexandra says she’s incorporated the theory and practice into her daily life. “I’ve always been interested in the hermetic. I’ve had my own iconography for years, which developed from my fascination with symbols from many different sources.” To her, tarot is like “opening up the imagination.” Now, she draws two cards every morning, incorporating tarot into her daily practice of mindfulness.

“I begin my work by having a conversation with my imagination.”

For Alexandra, art has always been the easiest language with which to communicate the thoughts and feelings that live deep within her psyche. “I begin my work by having a conversation with my imagination.” When I ask how she is able to access such places so easily, she says she’s been cultivating it all her life.

“I was very lucky to have a mother and father who were both artists.” Encouraged from an early age to exercise her creativity in artistic outlets, Alexandra would later marry her art professor (“a fabulous eccentric”) and start a community based on the philosophies of painter and poet William Blake on the 70-acre farm where the pair lived and raised animals. They called it Golgonooza after the “visionary city of art” cited in Blake’s mythology. “We were constantly reading, constantly feeding the imagination. I was always cultivating this imaginative world.”

“I’ve been lucky to have those experiences, which grounded me and gave me a rich life… Then I had to leave, had to grow up. I had been under the wings of my teacher for so long. I had to become my own teacher. So I left with my two little children, aged 7 and 4, and lived in New York City for a while before settling in Santa Fe (NM).”

Alexandra also credits travel as a reinvigorating force for her work, citing places like Paris (where she lived for a year), as well as India and Italy. “I’ve always looked for deep soul experience. The imagery comes from that.”

A prolific dreamer, Alexandra also draws inspiration from her dreams and has been keeping dream journals since she was a young adult. “A lot of paintings come from dreamwork.” She describes a particularly affecting dream she recently had, in which a bird sat perched atop a chair, an egg balanced precariously next to it. “I was struck by the trust this bird had that, even in this moment of uncertainty, its baby would not roll off the chair.” Such visceral feelings, combined with striking visuals, compel her to continue painting.

It was an absolute pleasure to speak with Alexandra. I feel connected to her now in a way I hadn’t anticipated. “I open up to the things that come to me.” (As an example, she mentioned her spontaneous trip to India). “It’s a beautiful process of life. We’re invited to experience another journey somewhere else.”

Having spent the past few years living in different countries myself — taking trips in search of adventure — I can’t help but relate.

We talk about the anxiety, the stress and doubt that inevitably comes when making such seemingly gutsy decisions, and agree that, in the end, the experience we end up having is more than worth it. “You have to keep diving into life, or else what are you here for?”

Remember, the artist receives a greater portion of the proceeds if you buy directly from Pomegranate. 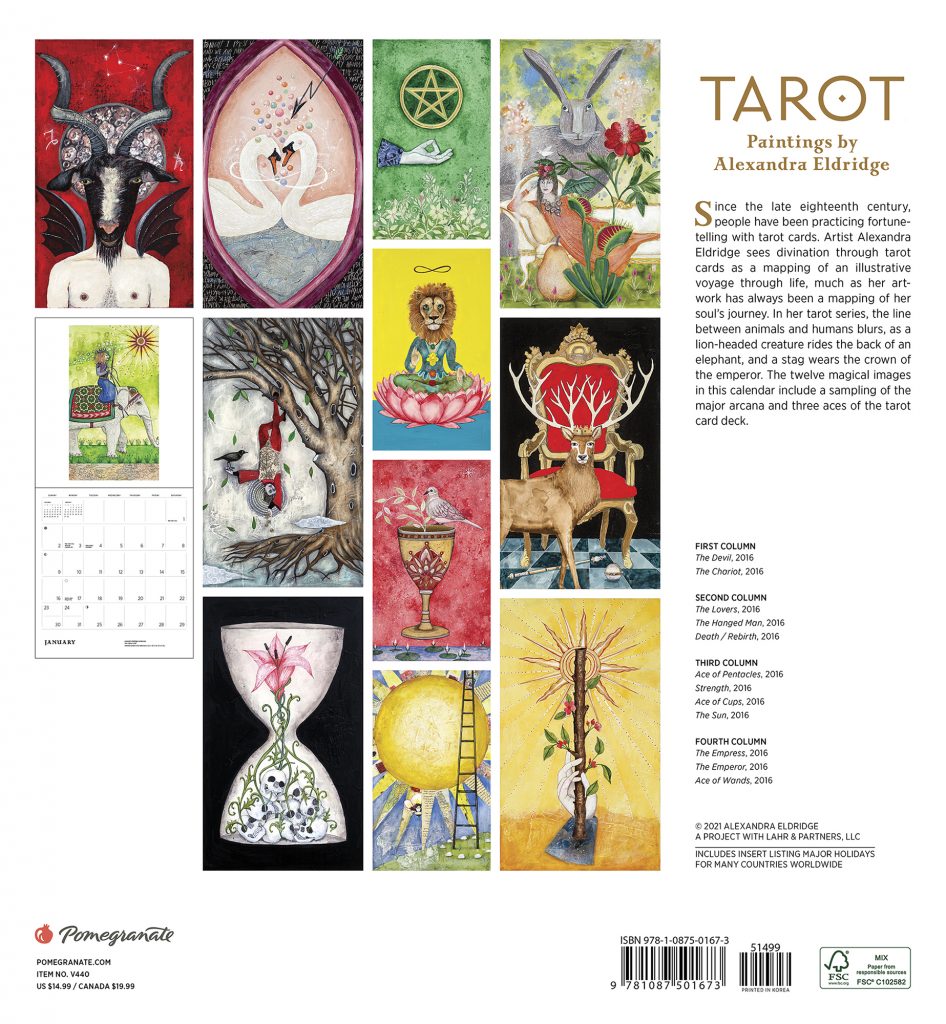 Click here to see Alexandra’s notecards on the Pomegranate site.

Photo of Alexandra above was provided by her and is used here with her permission. All rights reside with her. Thank you, Alexandra!

Celebrating the Life and Legacy of André Leon Talley

by Roza Melkumyan December 23, 2021
As a member of the FF2 Media team, Roza writes features and reviews and coaches other associates and interns. She joined the team as an intern during her third year of study at New York University. There she individualized her major and studied narrative through a cultural lens and in the mediums of literature, theatre, and film. At school, Roza studied abroad in Florence and London, worked as a Resident Assistant, and workshopped a play she wrote and co-directed. After graduating, she spent six months in Spain teaching English and practicing her Spanish. In 2019, she spent a year in Armenia teaching university English as a Fulbright scholar. She has continued to live in Armenia, and loves every second of it. Her love of film has only grown over the years, and she is dedicated to providing the space necessary for female filmmakers to prosper.
Previous Post Next Post

Celebrating the 2022 MacArthur Fellows: Musician I

"Despite backlash from the government and her own

Congratulations to Martha Gonzalez, a 2022 MacArth