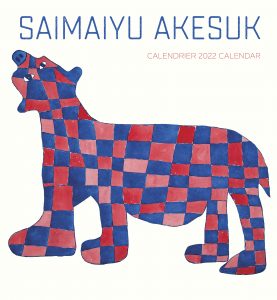 This holiday season, we’re excited to introduce Pomegranate, a publishing and printing company that offers its customers “art you can bring home.” In celebration of Pomegranate’s commitment to inclusivity, we’re excited to spotlight some of the brilliant women artists in their catalogue! Read more about Pomegranate below!

Saimaiyu Akesuk’s vibrant animal drawings not only leap off the page but seem to run towards and reach for you, the viewer. With their mid-motion feet, widespread wings and craning necks, Akesuk’s bears and birds appear active and alive.

Born in 1988 in Iqaluit (the capital city of the Canadian territory of Nunavut), Akesuk was raised in Kinngait (the Nunavut Inuit hamlet formerly known as Cape Dorset prior to February 2020). The arctic environment of her home region is immediately recognizable in her renderings of animals to anyone who understands heavy snow. Akesuk’s animals all have a firm footing, with abstracted paws, talons, and fins solidly planted and supporting strong cores. Nevertheless, they have an organic quaver as though combatting elements in the negative space surrounding them. The settings are sparse; the animals brace themselves against arid obscurity.

There seem to be something artists of the North share, though finding a word for it can be as challenging as walking against the wind, blinded by oncoming gusts. But from New England author Shirley Jackson’s simple and direct horror stories to Akesuk’s own artistic inspiration, artist Ningeokuluk Teevee, there seems to be a haunting and magical quality to artists facing the cold, at times unsettling, and at times deeply warming.

The far north is mysterious and dangerous. Tundra offers little context and even less shelter, but there is no denying that the animals Akesuk carefully draws are “winning” against the cold. Each beast or pair of beasts takes up space, filling almost every corner with their fur and plumage in imaginary colors that recall the sky during sunsets, meteor showers, and the aurora borealis.

Akesuk’s work is often referred to as whimsical, and her bold color choices and patterns are called forth. There is a carnival broadsheet quality to the spangled, checkered, and dotted creatures in wildflower colors that immediately draws the viewer in. The bright palette and animated patterns are a clear invitation to stare. Her work brings a strong element of play, balanced with a prospecting curiosity for the shapes in nature. Even with simplified silhouettes, the anatomy and symbolism of each animal is captured. Mother bears are monoliths protecting their young in their large bellies or shadows; birds are poised to take flight with complex patterns on their wings.

The artist’s line quality is thin and strong, as though it too is cutting through a bitter cold path and melting as it goes. Akesuk uses intricate linework to texture the surfaces of her animal subjects, which gives them another layer of armor and intrigue. She scratches quickly with a pencil and makes great use of repetition of gesture, which imbibes her forms with motion and vitality. The forms are often coupled: birds gazing beak to beak at one another, or arching long necks away from the same joined body. In addition to these details, the piercing eyes Akesuk draws give her creatures a human quality, all of them having inner thoughts and many of them in relationships with each other.

As the artist contains tactile complexities within controlled, simple shapes, Saimaiyu Akesuk’s animals are unforgettable. Each creature holds an entire world in its gaze, its wings, and its belly. Active and attentive linework, flowing colors, and patterns that make the eye dance breathe life into each figure. Outside of the energetic bodies, she draws is a world of space and openness, impartial and without a clear narrative. Thus, we are left only with the imprint of these strange fantasy creatures as they push forward into worlds unknown.

There can be no better metaphor for entering the new year. 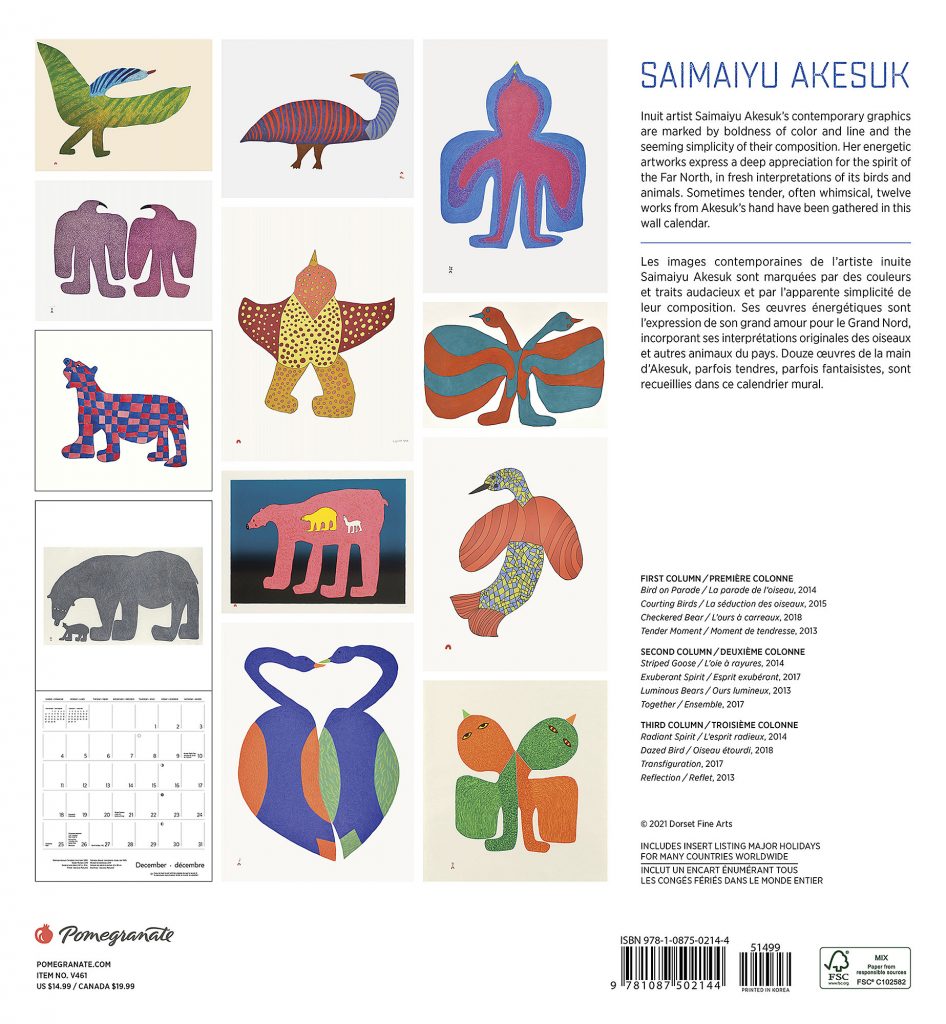 A new Saimaiyu Akesuk 2022 Wall Calendar is available for purchase on Pomegranate.com. Check it out here!

Remember: When you order directly from Pomegranate, the artists receive a larger percentage of sales.

Pomegranate has a large collection of Inuit art items including books, mobiles, notecards, puzzles etc, for young and old (most of which contain additional images by Saimaiyu Akesuk).

Laura Kosann satirizes social media in mockumentary ‘The Social Ones’

Revisiting Marielle Heller’s ‘Neighborhood’: A Comfort in Time of Uncertainty

by Allison Green November 30, 2021
Allison Green is a writer, art maker, and art lover based in Queens, NY. Raised in rural Vermont, Allison was taught by neighbors to sew, quilt, and weave from a young age and has turned it into a 10+ year career as a seamstress and textile artist. Her work as costume maker has been in Broadway productions of Phantom of the Opera, Moulin Rouge, The Lion King, My Fair Lady, and others, as well as off-Broadway houses such as Sleep No More (New York NY). Practicing and studying fiber art inspires Allison to stay immersed in the eclectic stories of global female artists. She is an avid reader and independent researcher of material culture through an intersectional feminist lens.
Previous Post Next Post