Crafting Femininity at NYC’s Museum of Art and Design

At Craft Front and Center, an exhibition from the permanent collection of The Museum of Art and Design (MAD) in Manhattan, the wall text opens by welcoming Craft as an art form to the spotlight — at last. Craft used to be on the fringes of the art world and now finally shines as a respected artistic pursuit. The fact that craft has been on the margins of art for so long makes sense because Craft is a form that has long been led by the marginalized. Certainly, in the American canon, so-called “fine art” used to refer largely to the paintings of the white male elite. Craft — as part of the Arts and Craft Movement — was withheld from art discourse in part because it would have meant acknowledging the art of so many working-class artists, global immigrant and indigenous artists, BIPOC artists, and female artists.

Craft Front and Center cuts through this divide. On view is an eclectic range of objects from both female and plenty of male artists working across different ideological and cultural movements. This was, at first, a surprise. It’s the only exhibition I’ve visited in which multiple pairs of artists on view are married couples – plus, a mother and son. Craft Front and Center is about a love of material and its expressive potential, and not, as a cynical part of me had predicted, a room full of “women’s work.” Female identity is, however, a persistent theme in this room. There remain strong examples of artists exploring femininity in every corner of Craft Front and Center. There is no simple pattern to these works and no single through-line. Still, I felt most drawn to the objects in which female artists examine and seem to salute aspects of female experiences.

Fiber art is everywhere in Craft Front and Center and while artists of all identities engage with the medium, women and groups of women have led the world of fiber for much of history worldwide. Fabric recalls the domesticity of kitchens and childcare and has been used to symbolize the female body in art, tradition and ritual, and lore.

Olga de Amaral’s large hanging work entitled Muro tejido 1 (translation: “Woven Wall”)  first drew me in. The work is an intricate composition of hand-spun wool fibers, which the artist weaves from small into large vertical lines of rosy and rusty warm hues. As I backed up to take in the whole, images emerged in the pattern. I saw abstracted women in dialogue, their hair braided together. Looking again, I saw many sets of long-fingered hands at work. Muro tejido 1 is an orderly, patterned weaving, though the fraying fringe at the bottom gives the neatly woven lines greater significance: this piece took so many threads to build.

Facing Muro tejido 1, I thought of the ancient Roman story in which Psyche must prove her love to the Goddess Venus by performing strenuous labors. Unlike the labors of another classic myth and masculine symbol — Hercules — Psyche is not tasked with slaying monsters, but with arduously minute tasks, like sorting a mountain of the tiniest grains into place. This story allegorizes the nature of “female labor:” exercising finesse and extreme patience while working with the invisible. Muro tejido 1 is meticulously detailed, but these details disappear to the eye from even a few inches back, creating that same sense of the invisibility of women’s work. The title, Muro Tejido 1, also create striking Hercules/Psyche, masculine/feminine dichotomy. The teijido, the female, soft, manipulable fibers woven together, overtakes the male territory of muro, the austere barrier of a wall. 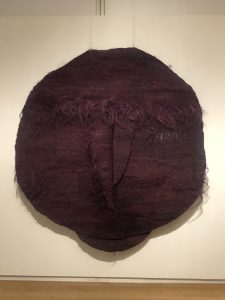 Magdalena Abakanowicz’s Abakan Violet tells the viewer a similar story. While fiber begins with the minuscule and breakable, it can ultimately dominate a wall — a potent reexamination of a “woman’s place.” Abakan Violet is a heavy-looking, round giant. She seems to float on the wall as a stand-in for many possible female monoliths: a moon, a mothership, mother earth. Alternatively, she is the egg and/or the pregnant belly. Tired of a trope as it is in art criticism, it’s nearly impossible not to notice the form of a labia. From the center of the work bloom two asymmetrical folds, topped with a row of long, curly, hair-like fiber that is distinct from the rest of the work’s more even textures. Even still, it is not the presence of suggested female anatomy that makes Abakan Violet a piece about femininity. It’s the scale. This piece simply takes up space and demands that the eye find its center. Its massiveness further underlines the connection between female hands/fiber and the daunting labor that faces women. Abakan Violet is assembled in part of unbraided ropes. The artist’s chosen medium is on a paradoxical journey between wispy weakness and tremendous, weight-bearing strength. I think again of Psyche separating individual grains from a heap.

I was perhaps most excited to approach and examine Amber Cowan’s sculpture Dance of the Pacific Coast Highway at Sunset (2019). This pink, iridescent glass scene is a declaration of love to what MAD calls “decorative maximalism.” The artist celebrates “female independence” in a found-object fantasy world that features ballerinas, swans, and layers of flower-like forms that create the silhouette of a pitched roof house. Cowan stages dolls in a dollhouse that appear candy-coated. This saccharine excess is a playful take on stereotypical girlishness. The longer I looked, however, the more personal and darker the piece became. The layers of pink glass read as the female anatomy, making the choice of medium a shuddering notion. This is not the soft yarn of 2017’s pussy hats, but a female form, legs spread wide, made of shards. This world is precarious and easily shattered. In its intricacy, the myth of Psyche again comes to mind. Cowan sourced her glass through meticulous foraging in factory scrap yards, flea markets and antique sales. Like the many fiber works on view, Cowan’s sculpture is an accumulation of millions of tiny pieces, the finesse and patience of which characterizes an overwhelmingly-female practice.

Walking around and reading themes of femininity throughout Craft Front and Center is not the exhibition’s goal, and what I noticed might not be the artists’ intention. A different viewer on a different day could linger on works I only skimmed over. But finding femininity – from the poignant to the playful — is part of what it means to celebrate craft as a medium. Craft is intrinsically about identity. It always shows evidence of the human hand and is therefore inseparable from human thought. Craft belongs “front and center” because it is a decentralized form of artmaking; it is not bound to a single ideology. Instead, it creates ideologies after the fact, simply by inviting viewers to see themselves and reflect on their own identities. 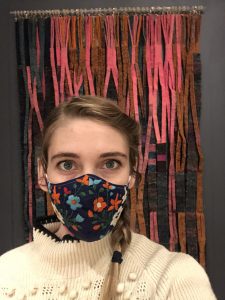 To visit Craft Front and Center and to learn more, click here.

Photos taken inside the Craft Front and Center exhibit at The Museum of Art and Design (MAD) in Manhattan were taken by Allison Green for FF2 Media © FF2 Media. Authorized for responsible use as long as the link to FF2’s webpage is included in credit.

‘We are a mighty tribe’: Female directors make up ‘Half the Picture’

For Your Little Princesses: Films to Stream while in Lockdown

by Allison Green October 29, 2021
Allison Green is a writer, art maker, and art lover based in Queens, NY. Raised in rural Vermont, Allison was taught by neighbors to sew, quilt, and weave from a young age and has turned it into a 10+ year career as a seamstress and textile artist. Her work as costume maker has been in Broadway productions of Phantom of the Opera, Moulin Rouge, The Lion King, My Fair Lady, and others, as well as off-Broadway houses such as Sleep No More (New York NY). Practicing and studying fiber art inspires Allison to stay immersed in the eclectic stories of global female artists. She is an avid reader and independent researcher of material culture through an intersectional feminist lens.
Previous Post Next Post