Nia DaCosta’s ‘Candyman’ Delivers on Both Gore and Reality

Director/writer Nia DaCosta creates a deliciously gory film with not only visual effects but also gut-wrenching sounds. Sometimes, it’s what you don’t see that’s frightening. Candyman takes place in the Chicago Cabrini-Green area, which was once a low-income housing project. An artist named Anthony McCoy (Yahya Abdul-Mateen II) and his partner Brianna Cartwright (Yahya Abdul-Mateen II), a gallery director, are a couple living in the now gentrified Cabrini-Green. They learn about the legend of Candyman. But, they get more than what they bargained for. Candyman is an intricate film with many layers. It’s not only a thriller but an eye-opener on society’s ever-present racial tensions. The film is not only sensitive to the plight of Black people in this era, but it’s also a reminder that violence and racism have always happened.

The opening scene takes place in the neighborhood from the 70s. William Burke, aka Billy (Rodney L. Jones III), is a teen boy who is playing a pretend game, alone in his room, of cops harassing an innocent person. In the next scene, you see him on his way to do his laundry. In the same scene, the cops are after a man called Sherman Fields (Michael Hargrove) who is nicknamed “Candyman.” I noticed the tension between the white cops and William, who happens to be a young Black teenager. As the cops scowl at William, they hold a wanted sign of Candyman up to the police car’s window. William stares at them blankly and walks off.

Sherman is falsely accused of a crime involving a razor blade being inserted inside of a little white girl’s candy. He hides in a wall that is in the same place as where William does his laundry. Candyman has a hook for one of his hands and wears the creepiest grin. It’s refreshing that the actor had on very little gross traditional horror makeup yet had the most menacing appearance.

As William starts doing the laundry, Sherman slowly appears from a hole in front of him with an offering of a handful of candy. The boy is petrified and delivers a loud and horrifying scream. The cops hear his yell and they rush in only to beat Sherman to death. The crime of adding razor blades to children’s candy continued after his death.

Then, the film fast forwards to 2019. Troy Cartwright (Nathan Stewart-Jarrett), Brianna’s brother, introduces his boyfriend Grady Greenberg (Kyle Karninsky) to her and Anthony. After a tense and awkward discussion on gentrification, Troy decides to tell a ghost story about a white graduate student, named Helen Lyle, who researched the urban legend of Candyman. He explains that she frequently visits Cabrini and melts into insanity. This led to her, according to the story, kidnapping a baby boy as an attempted sacrifice to Candyman. The baby was rescued, however.

The acting is sublime and the chemistry among the actors is obvious, especially in this particular scene. The actors seamlessly interact with the story with giggles and remarks. The scene is a bit light-hearted. But at the same time, they listen and stare intensely. It’s a nice combination of amusement and eeriness.

Anthony does more research for a future art exhibit on the legend of Candyman by going to the place where it all began. As he’s taking a picture, a bee stings his hand. The bee sting gets worse throughout the film. He observes the environment and takes pictures of old graffiti which is written all over the walls. As he’s exploring the scene, he notices a cop car and recoils. This gives us an all too familiar realization of the racial tension between the police and people of color, particularly for Black men. He soon meets William (Colman Domingo) who grew up in the area. William makes a few comments about the police and how they rarely show up unless it is for an arrest. But the most haunting is the quote about how the police are “keeping us safe, or keeping us in.” He tells Anthony that as a kid he saw Candyman.

After his impromptu interview about Candyman with William, Anthony becomes inspired and starts to paint for an exhibit. His art is underappreciated at the event. People are being killed after they summon Candyman by saying his name five times. Later that night, after the event’s closing, two grisly murders are committed in the gallery. The victims are Clive Privler (Brian King), Brianna’s boss, and Jerrica Cooper (Miriam Moss), his lover/assistant. The sounds of the slashing, cutting, and blood-spilling are far more bone-chilling than the actual murdering. They are found the next morning by Brianna.

Later on in the film, a group of four teenage girls says Candyman’s name five times in a high-school girl’s washroom. They’re all murdered shortly after they say his name. You don’t see anything too graphic, but you hear a lot of bloodshed.

Anthony becomes more obsessed with finding out more about Candyman and starts painting more portraits of him. In another conversation with William, Anthony learns more about Candyman and how there have been several Black men who take on the form of Candyman throughout the years. They have something in common. They’ve all been murdered by a racist society and they come back as him. William says, “Candyman is how we deal with the fact that these things still happen, that they’re still happening.”

“These things” are racial injustice, murders, and mistreatment of people of color. The film may be fiction. But the plight of people of color isn’t. There’s some reality in this film. One example is the murdering of innocent Black people by the cops. Another example is the immense apprehension between the police and Black people. I feel like this film gives you a peek into the other side of civilization, where life may not be as simple. 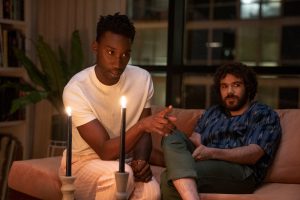 Watch at Home: ‘A Simple Favor’ & more from female filmmakers

Watch at Home: ‘The Wife’ & more from female filmmakers

by Stephanie A. Taylor October 1, 2021
Stephanie A. Taylor is an award-winning journalist living in Chicago. She's been with FF2 since 2016. Her niche is women's issues. Her favorite articles she's written are: Women in media facing sexism, exclusivity, Pulchronomics plays a prominent role with women in media, and her interview with Danièle Thompson, French director of Cézanne and I (Cézanne et Moi.)
Previous Post Next Post