Alma Thomas Was as Full of Life as Her Paintings

Much like her colorful paintings, Alma Thomas exuded energy and verve, signaling a deep love for the beautiful things in life. Her intricate designs emulating the elegance of nature seem to have poured out of her soul. From her childhood in Georgia to her retirement in Washington DC, Thomas was an inspiration.

Growing up, Thomas was the oldest of four daughters in a well-respected family in Columbus, Georgia. Her father was a businessman and her mother — to whom Thomas attributes her creative spark — a dress designer. Though Thomas was Black and educational obstacles due to racial discrimination limited her exposure to fine arts, she spent much of her childhood exploring and enjoying nature, art in itself. Eventually, her family moved to Washington, DC to escape the racial violence happening in Georgia, and Thomas was able to begin her career as an artist.

In 1924, Thomas was the first to graduate from the new arts program at Howard University. Thomas is thought to have been the first Black woman– in fact the first woman at all– to receive a bachelor’s degree in art in America. She then earned an MA in education from Columbia University. After that, she began teaching in public schools in DC to support herself while she developed her skills in painting. Thomas said of her teaching: “I devoted my life to the children, and I think they loved me; at least those did who were interested in art,” and she was right. While teaching, Thomas worked to develop many art programs for her students: among them, the first art gallery in the DC public school systems and a community program for the appreciation of fine arts. Though her own childhood denied her access to her passion, she made sure that her students would not experience the same. 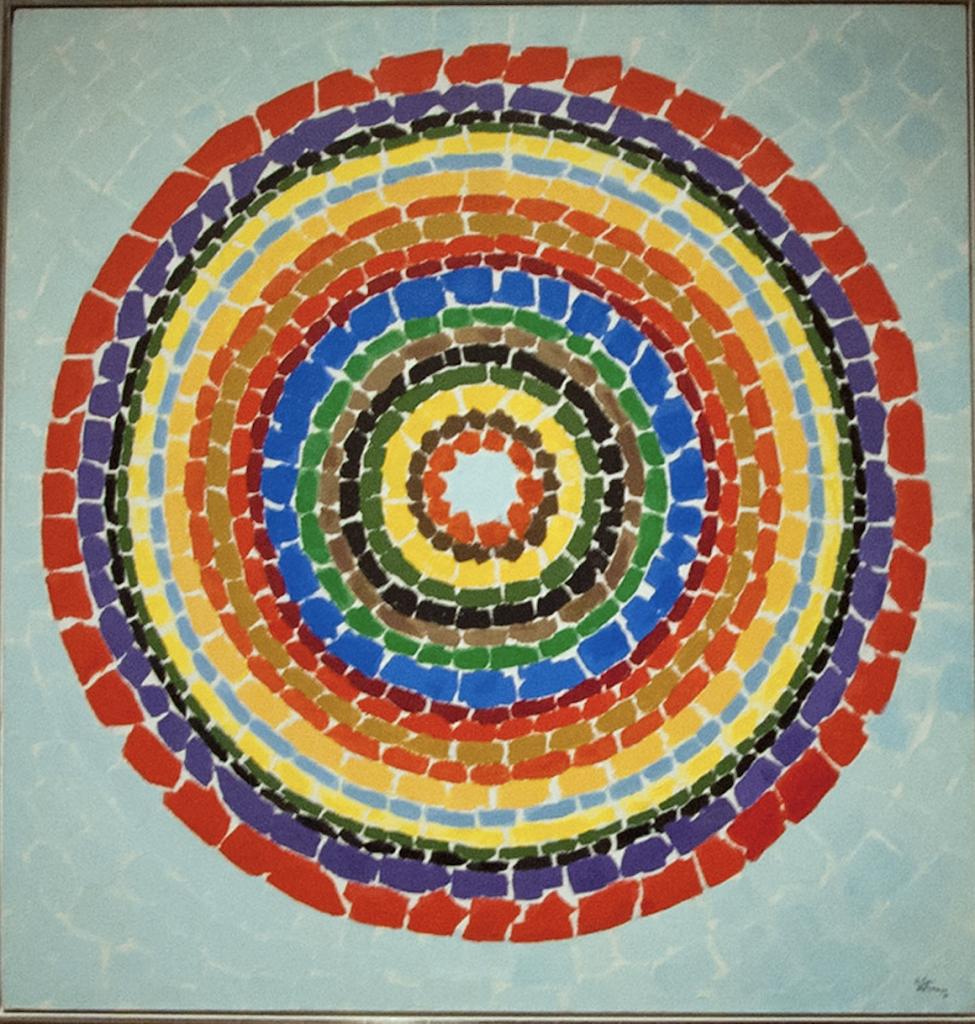 After a thirty-eight-year career as a teacher, Thomas retired, and she was finally able to devote herself to painting full-time. Much like during her childhood, she began spending her time observing the wonders of nature, but this time she was armed with a canvas and paintbrush to make recreations of her own. Her painting, Alma’s Garden (1968), represents the myriad of colors from her garden, a fitting piece as she spent many afternoons of her retirement at her window, gazing out at the scene in her backyard.

Like Alma’s Garden, all the pieces in Thomas’ body of work represented the fantastic colors and general vivacity of nature. In a press release for Columbus Museum of Arts and Sciences in 1982, Thomas stated, “Man’s highest aspirations come from nature. A world without color would seem dead. Color is life. Light is the mother of color. Light reveals to us the spirit and living soul of the world through colors.” Her work certainly reflects this sentiment. Her signature style, lovingly coined “Alma’s Stripes” featured small blocks of bright colors, meticulously placed in intricate patterns to represent the natural world that awed her. 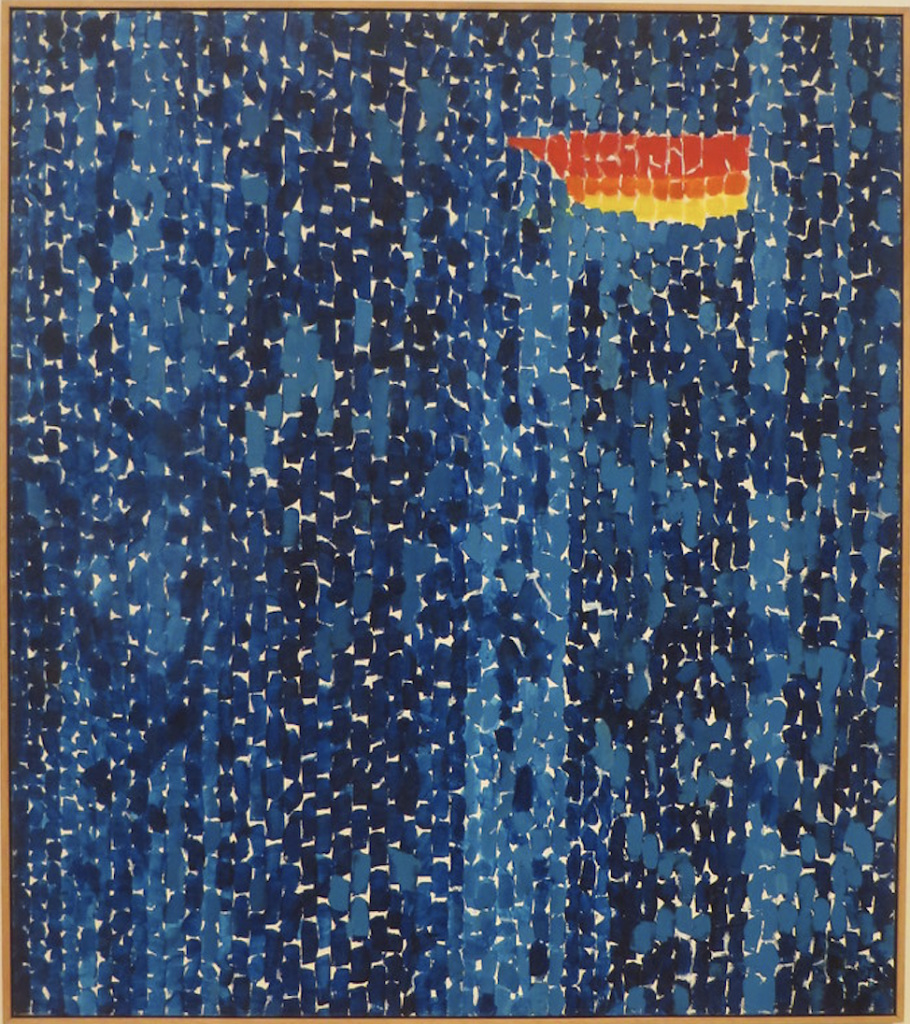 She painted at the time of the US’s biggest innovations in space, and this was an inspiration for her work as well. She wrote: “Today not only can our great scientists send astronauts to and from the moon to photograph its surface and bring back samples of rocks and other materials, but through the medium of color television all can actually see and experience the thrill of these adventures. These phenomena set my creativity in motion.” She created works such as Apollo 12 Splash Down (1970) and Celestial Fantasy (1970) which celebrated the wonders of space in her signature style, “Alma’s Stripes” in bright colors.

Though it was a seemingly universal celebration of life, Thomas’ exuberant artwork did not go uncriticized. She emerged as an artist as the Civil Rights Movement broke out. Other Black women questioned how she could paint with such bright colors, such joy, in a time that felt so dark and devastating. Thomas responded to these critiques by asserting that her art transcended her own identity as a Black woman. She stated: “It is of all ages, of every land, and if by this we mean the creative spirit in man which produces a picture or a statue is common to the whole civilized world, independent of age, race and nationality; the statement may stand unchallenged.” Without disregarding the gravity of the situation around her, Thomas wished for her “creative spirit” to rise above it, to stand independently from her identity as a Black woman, to encapsulate the timeless universality that her artwork merited.

This was not the only challenge facing Thomas during the time she finally achieved distinction as an artist — she was also nearing the end of her life. As she developed her craft more and more, she felt driven to do bigger things in her art — literally. She said: “I’d like to make [my] canvases bigger, like Sam Gilliam’s, but my arthritis is so bad that I can’t get up on my ladder.” Yet, she persevered. In 1976, at 84, she completed Red Azaleas Singing and Dancing Rock and Roll Music, an explosion of reds and oranges so dynamic they actually appear to be dancing, on a 13-foot-long canvas. She once said of this painting, “Do you see that painting? “Look at it move. That’s energy and I’m the one who put it there. . . . I transform energy with these old limbs of mine.”

In spite of the challenges she faced throughout her life, Thomas’ tenacious work brought her impressive distinction as an artist. In 1972, she became the first Black woman to have a solo exhibition at the Whitney. Her painting Resurrection (1966) was the first work by a Black woman to enter the White House Collection. Her work has been featured in many exhibitions and celebrations throughout the US.

She was a powerful talent and a delightful human being, and her spirit will live on in her vivacious collection of paintings.

A new Alma Thomas 2022 Wall Calendar is available for purchase on Pomegranate.com. Check it out here!

Feature photo: “Alma Thomas – Elysian Fields [1973]” by Gandalf’s Gallery is licensed with CC BY-NC-SA 2.0. To view a copy of this license, visit https://creativecommons.org/licenses/by-nc-sa/2.0/

Photo 2 (right): “Starry Night and the Astronauts, 1972, Alma Thomas, Art Institute of Chicago, Chicago, Illinois” by Ken Lund is licensed with CC BY-SA 2.0. To view a copy of this license, visit https://creativecommons.org/licenses/by-sa/2.0/

by Julia Lasker September 24, 2021
As an associate for FF2 Media, Julia writes reviews and features for films made by women. She is currently a senior at Barnard College studying Psychology. Outside of FF2, her interests include acting, creative writing, thrift shopping, crafting, and making and eating baked goods. Julia has been at FF2 for almost 4 years, and loves the company and its mission dearly.
Previous Post Next Post