by Anna Nappi
Arts: Performing Arts SWAN of the Day
No comments 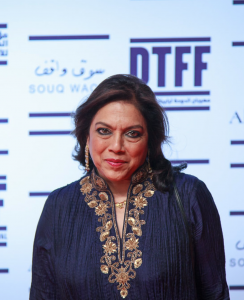 On the five-year anniversary of Queen of Katwe, we celebrate filmmaker Mira Nair!

This biographical drama is perfect for fans who loved The Queen’s Gambit, as it centers on a young girl who wants to become a chess master. Her name is Phiona Mutesi, and she lives in Katwe, the capital of Uganda. In real life, Phiona represented Uganda at four Women’s Chess Olympiads and is one of the first titled female players in Ugandan chess history. The film follows her journey from selling maize with her mother and siblings at the market to leading the Uganda team at the Chess Olympiad in Russia.

In Jan Lisa Huttner’s review of the film, she writes, “Although the slums were surrounded by shades of dull and dusty browns, I loved how the brightly colored clothes popped. The fact that parts of the movie are spoken in Swahili with English subtitles adds to the authenticity, along with the upbeat African music. Overall, I liked the film. I admire the fact that not only did this girl have the odds stacked against her, but she realized that her life could flourish through something she loved and also was good at. I was certainly rooting for Phiona all the way.”

Mira Nair is an Indian-American director whose films primarily focus on Indian economic, social, and cultural themes for a diverse audience. In 1988 she released Salaam Bombay!, a Hindi-language movie that earned an Academy Award nomination for Best International Feature Film as well as a Golden Globe nomination for Best Foreign Language Film. Katusha Jin wrote that Salaam Bombay! is “as much about the cycle of poverty in the lower social classes as it is about asking at what point is it okay for people to ignore basic morals to make ends meet? The children are forced to grow up extremely quickly amidst the grueling realities of child labor and prostitution. The audience watches how adults betray them, how they lose their innocence and grapple with the idea of the harsh reality. Emotionally, this was a very difficult film to watch because for two hours, rather than passing these children by as we would in real life, we live in the center of their world.” Read the rest of Katusha’s harrowing review here.

Many years later, Nair directed Vanity Fair starring Reese Witherspoon. Witherspoon plays a charismatic orphan who strives to climb the social ladder and achieve success in an attempt to defy her birthright but faces many obstacles along the way. Jan Lisa Huttner interviewed Nair when she was promoting her film in 2004, and discussed, among many topics, the sensuality of Vanity Fair, and how Nair masters the tone shifts throughout her filmography. She shared that “it’s all in how I do it. Keeping the buns on the seats is very important to me. It requires that ineffable thing called rhythm and balance in moviemaking. Foils have to be created, counter-weights. From the intimacy, let’s say, of a love scene to the visceral, jugular quality of war. That shift is something in the editing, how one cuts from the intimate to the epic that keeps you there waiting. The energy propels you, the energy.”

Check out Queen of Katwe on Disney+, or celebrate Mira Nair’s talent by watching any of her other wonderful films today!

Featured photo: “Queen of Katwe” by Pink Cow Photography is licensed with CC BY-NC 2.0. To view a copy of this license, visit https://creativecommons.org/licenses/by-nc/2.0/

‘Testament’ is a Beautiful Example of How Dance Can Adapt

Nixing ‘Dixie’: The Chicks, Politics in Art, and the Power of Language

by Anna Nappi September 23, 2021
Anna is currently a senior at Brandeis University studying Film, Journalism, and Psychology. At Brandeis, she writes for the student newspaper and is the undergraduate degree representative of the Journalism program. From theaters to museums to concert halls, she loves exploring the art world in Boston as well as in her Maine hometown. Anna is passionate about FF2’s mission and excited for the opportunity to work alongside a wonderful team dedicated to supporting women artists.
Previous Post Next Post