The Brooklyn Public Library’s 2021 LitFilm: A BPL Film Festival About Writers kicked off this week with a screening and Q&A from director Lynn Novick and producer Sarah Botstein.

Novick and Botstein are directors and producers of documentary films. As they introduced themselves, Botstein observed, “We’re often introduced as film married.” The two of them have collaborated on a number of projects over the last two decades including a series on the Vietnam War. Currently, they’re collaborating with Ken Burns on a documentary about the US response to the Holocaust and a series about Lyndon Johnson.

The BPL screened the first episode of their latest series on Ernest Hemingway’s life and work. Novick and Botstein’s talkback brought them to discuss a unique challenge of the writer documentary: how to explore a writer’s life and work in film, grappling with the intersection of two artistic mediums.

One component of this challenge is that film needs auditory and visual components whereas writers’ work is, obviously, traditionally in text. A film needs to add something to the text, different from a reading or even a radio show.

This is especially difficult when dealing with an author’s life in conjunction with their writings. There is a tension between exploring the new layers context can provide and suggesting that an author’s personal life can provide direct interpretations of the work, which is usually intended to speak for itself.

Another component of this challenge with fiction writers like Hemingway is portraying fiction in film, striking a balance between creative expression and loyalty to the text. Novick suggests that there is a necessary level of abstraction that allows a literary text to appear as closely in its original form as possible.

Different filmmakers approach these challenges in different ways. For Hemingway, Novick and Botstein had three teams working respectively on still images, videos, and textual archives from Hemingway’s life and from his period in history. Each team was able to spend significant time with their medium.

Botstein noted that Hemingway’s life lends itself to multimedia exploration: “It’s not just that he was an incredible writer and a really interesting, complicated, somewhat unlikeable guy,” she said, “He lived a ridiculously interesting life and seemed to be actually everywhere.” A proliferation of handwritten materials along with his library, which has remained preserved in his home in Cuba, provided ample tactile and visual material for the filmmakers to use. For the soundtrack, the team were able to take inspiration from Hemingway’s beloved collection of records, “which was quite fun,” Botstein said.

Watching the first episode of the Hemingway series, I was surprised to learn about Hemingway’s complicated relationship with his gender and sexuality. Botstein talked about the “dynamics of Hemingway and the camera,” noticing the self-conscious performance he often displayed when photographed. The spectacles of his hyper masculine escapades of bull fighting and fish wrangling (what Lynn calls “macho-posturing”) lend themselves well to film, helping me appreciate the complexity of the person behind the voice I hear in my head when I read A Moveable Feast.

On the second night of the LitFilm festival, filmmaker Jill Momaday screened her short “Return to Rainy Mountain” and gave a Q&A afterward with her father, Pulitzer Prize-winning author and the subject of her short, N. Scott Momaday.

The short follows the daughter and father as they replicate the journey their Kiowa ancestors made. N. Scott Momaday captured the journey along with Kiowa myths and legends in his book The Way to Rainy Mountain.

“I’ve always wanted to experience the things he’s shared with me and written about,” Jill Momaday says. With this film, she approaches the challenge of making a film about a writer by foregrounding natural imagery, showing the landscapes and wildlife the Kiowa encountered on their journey.

Among the treasures in the documentary are photographs of Kiowa families. Few photos exist of the Momadays’ Kiowa ancestors, but Jill Momaday was able to include many in her film. Looking into the faces of the travelers in their daily lives and then watching Jill Momaday walking across the same landscapes, stretching joyfully, helps to collapse the past and present.

Tonight, the festival will screen Vita Activa, a film on Hannah Arendt. Director Ada Ushpiz approached the challenge of making a film about a writer by centering on Arendt’s own words, often spoken by Arendt herself in a 1964 German television interview.

FF2’s Jan Huttner wrote on Vita Activa, “As Ushpiz makes clear in the course of her film, Arendt was committed to a life spent in essential dialogue with herself, so she defined herself more through the act of thinking in itself than in the results of any particular thoughts articulated at any specific points in time.” This quality of Arendt’s work makes wading through the film difficult, Jan observes—just as, I’d argue, it’s often difficult to wade through Arendt’s own texts. But the film helps us to see Arendt’s “dialogue with herself,” understanding her unique ways of thinking and seeing over time what she can teach us.

Screening tomorrow, Flannery has a new kind of challenge in portraying Flannery O’Connor. When Novick and Botstein talked about Hemingway’s adventures, Novick said, “A lot of writers don’t live that kind of life,” to which Botstein replied, “They live in Vermont in their farmhouse and they write all day.” O’Connor’s life can be described similarly. Her largely isolated world and battle with lupus confined her to her home in Georgia for much of her adult life. However, O’Connor provided material as a film subject through her writing about writing. In her essays and letters, she narrated her own life, and the filmmakers let her words guide their film.

I described Flannery’s handling of the author’s fiction in my review of the film: “As O’Connor’s work is very visual and often violent, it lends itself well to the cartoonish illustrations and absurd facial expressions presented in the film. Someone with a Georgia accent reads the prose out loud, in a tribute to the strong regional accent that made O’Connor stand out when she moved in national literary circles.” Like the Hemingway crew, Flannery had a team of creators who paid careful attention to the materials available.

“We had some great artists who completely committed themselves to reading her work, understanding her storytelling, and loved and admired her,” director Elizabeth Coffman told me. Throughout this week, it will be exciting to continue to see the work of teams of filmmakers committed to storytelling and to the authors who inspire and fascinate them. 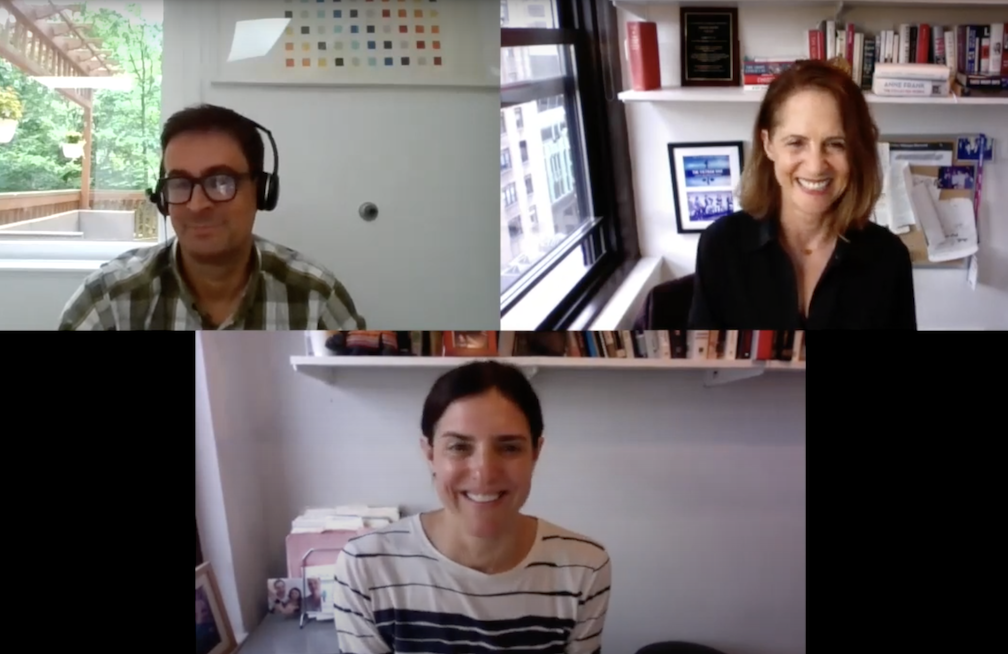 Featured Photo: N. Scott Momaday and Jill Momaday give a talkback co-sponsored by the Brooklyn Public Library and the Paris Review. Screengrab of talkback taken by Amelie Lasker, Sept. 21, 2021. is licensed under CC BY-SA 4.0.

Meet the Queen of the Punk Underground in ‘Lydia Lunch: The War is Never Over’

by Amelie Lasker September 22, 2021
Amelie Lasker joined FF2 Media in early 2016 while studying English and history at Columbia University. She received her Master's in English Literature at the University of Cambridge in 2019 and became a Contributing Editor at FF2. Her work with FF2 has earned her Rotten Tomatoes accreditation. Now, she is FF2's Brand Coordinator, developing iSWANs campaigns. Amelie is an artist herself; she is a produced playwright and fiction writer.
Previous Post Next Post