Behind the Scenes with ‘Fiddler: A Miracle of Miracles’ Animator Tess Martin

When I was asked* to interview filmmaker and visual artist Tess Martin, I was at once delighted and fascinated by both the media she uses and the ideas she explores. Martin’s work is informed by hand-made animation techniques and “their potential to explore the human condition.” When I sat down to talk with Martin over zoom, one of my first questions was how she came to favor this artistic medium.

Tess Martin: I was doing a conceptual fine art degree at the University of Brighton (UK) when I decided to attend the Edinburgh Fringe Festival and saw this puppetry show. I was really charmed by this idea that you can charm an audience without needing the mechanism [in this case, the puppet strings] to be a secret. So I went back to school and started making weird little cutout films and that was the beginning!

According to Martin, “there is something very immediate about puppetry. You’re there in a theatre [watching the animation being created] but that’s not normally the case. It’s very direct.”

Pulled by the active energy that runs through puppetry, Martin sought artistic media that had a dynamism of their own. One of her signature styles of animation involves painting on glass, which has attracted a number of clients seeking something visually unique for their projects.

Animating Fiddler: A Miracle of Miracles

Martin was a key contributor to the award-winning 2019 documentary Fiddler: A Miracle of Miracles which chronicles the story behind the creation of the beloved musical Fiddler on the Roof as well as the themes it explores and the reach it has had across time and cultures.

In the film’s opening sequence, a painted violin spins on its base as the title appears in large letters on the screen. Over the course of 4 months, Martin created about 6 minutes of paint-on-glass animation that mostly covers songs from the musical (some of which never made it either onto the stage or onto the screen). Her animations for Fiddler: A Miracle of Miracles often involve animals like birds, chickens and horses (in other words, the Fiddler on the Roof characters who were unable to speak for themselves).

In discussing her experience working on the project, I was reminded of Martin’s earlier comment about being charmed by art that doesn’t conceal the mechanism that makes the movement or creates the effect. In her finished sequences, Martin leaves paint residue from previous frames in following frames rather than scrub it away, thereby embracing the mechanism.

I asked Martin more about her experience working with the Fiddler: A Miracle of Miracles filmmakers and the work that went into animating her sequences.

Tess Martin: “We started talking about what they needed and what the film was. There was a lot of back and forth, a lot of sections that ended up getting cut at various stages.”

RMM: And how do you go about storyboarding those scenes?

Tess Martin: For Fiddler, we first talked about what the purpose of each section was, what came before and what came after. In some cases, there was already a soundtrack and in some cases not. If they have the dialogue or the audio track, I ask for it. Then I create an animatic [a moving storyboard done with simple drawings and used to communicate ideas for animated sequences]… Most people who do animation for hire end up doing an animatic stage but I tend to skip it if possible. It’s just much more fun to come up with those solutions under the camera than figuring out everything beforehand. Then it just becomes coloring in the blanks.

RMM: How long did it take to work on each animated sequence?

Tess Martin: It’s so hard to tell because we did the storyboards and animatics first and then I did the animations. So probably a month to six weeks for each section. It’s really intensive, you’re standing there under the camera for eight to ten hours a day.

While on the subject of commissioned work, I asked Martin about how she approaches commissions.

Tess Martin: I think it really depends on the commissions you accept. The more I’ve been able to support myself through arts funding for my own work, the more picky I can be with the clients I choose. I really only pick clients now where I feel I can really contribute almost as if it was my own project. That hand-made animation stuff is really intense, so I’d almost rather save all the energy I have for my own work.

Tess Martin: Definitely. To be honest, most clients that approach me already have that in mind. If they wanted something super conventional or mainstream, they probably wouldn’t even approach me. But it’s those people that say “I’m the director of this project but I want you to bring something specific that I can’t get from anybody else,” that I prefer to work with.

“I cycle through things,” Martin says. “It’s never the same thing.” When asked what has changed in her work since the beginning of her career, she highlighted a newfound ability to incubate her ideas before embarking on a project.

A wonderful example of this is her project Orbit, which explores the concept that the sun’s energy fuels the cycle of life. The project consists of a seven-minute animated experimental film that premiered at the Rotterdam International Film Festival in January 2019, as well as an interactive installation that was first presented at WORM UBIK in Rotterdam in April 2018, a flexi disc, and a print series.

I asked Martin to walk me through her process in creating Orbit and her thought process in choosing this particular medium to communicate her ideas.

Tess Martin: I always knew that it was a project about, in its most banal sense, our relationship to energy and our use of energy. But after more and more research I realized that this meant it was about our relationship to the sun. Ultimately, the sun is the source of almost all types of energy that we consume. So I wanted to get at this contrast between the age of the sun and our age as the latest dominant species on the planet and how disparate those two periods are. From the sun’s point of view, we are less than a speck of dirt. If we die, the sun will keep going for a couple of billions of years.

Orbit uses phonotropes, a technique to create animation using the confluence of the frame-rate of a live action camera and the revolutions of a constantly rotating disk, usually spinning on a record player. You can see exactly how Martin utilizes this technique to create her film and installation by watching her how-to on making a phonotrope video.

Tess Martin: I was doing an artist residency when I had this epiphany and realized that in order to really make the connection [between life on Earth and the sun], it was much more interesting to focus on the very domestic, direct ways that we experience the sun. We dry our clothes in the sun, we see our shadows, we feel the sun on our skin. Then there are the ways we don’t realize we are connected to the sun. Animals exist because the sun’s energy has provided food for them. Our use of fossilized vegetation is ultimately due to the sun. So then I realized that it’s really about loops, about the cycle of life. I thought I’d focus on small movements that can be repeated.

In earlier versions of Orbit, Martin had just one large disk that was hung on a wall and spun while videotaped. In order to focus more intimately on those small movements, she decided to break up the drawings into smaller disks and videotape them using the phonotrope technique.

The project included an interactive installation, a short film, and monoprints and Flexi discs that could be purchased. “It was my first time expanding one idea into different formats, reaching slightly different audiences, which I think I’ll keep doing with future projects.”

To learn more about Tess Martin and see more samples of her work, visit her website and/or her Facebook page.

To see the images that were cut at various stages from Fiddler: A Miracle of Miracles, click on the link for Vimeo.

In addition to working on both her own projects as well as her commissioned pieces, Martin moderates a monthly discussion event called Manifest: Animation Show & Tell from her home of Rotterdam (the Netherlands). Aimed at animation enthusiasts and the general public alike, Manifest explores the breadth and diversity of the art through presentation and discussion. You can learn more about Manifest – and participate! – via website or Facebook page.

NOTE: This interview has been edited for clarity. 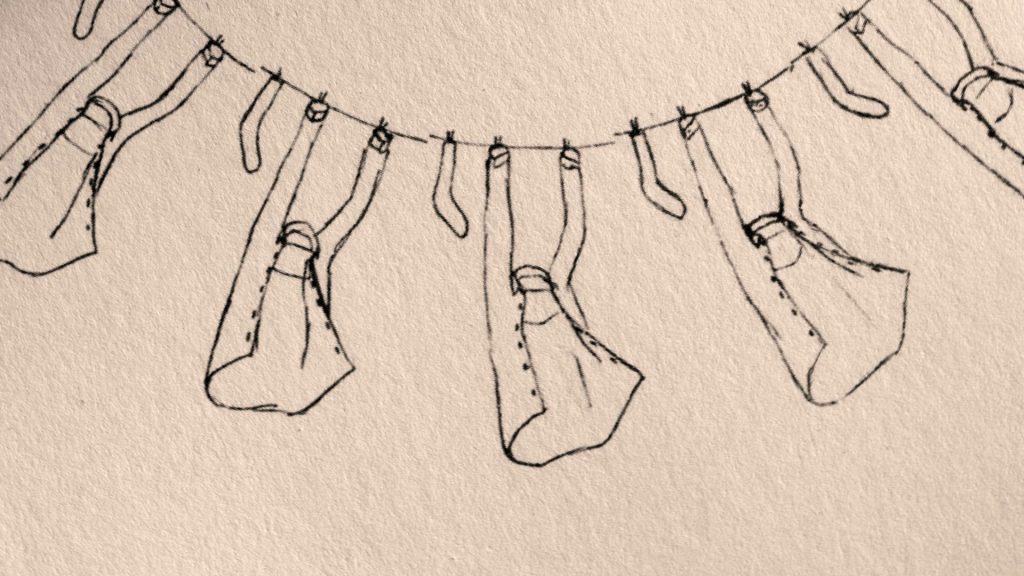 I am the person who asked Roza to interview Tess Martin. Just because I was one of the two Story Consultants working behind-the-scenes on Fiddler: A Miracle of Miracles doesn’t mean that I knew much about many of the pieces Director Max Lewkowicz was pulling together to create this wonderful documentary. So huge thanks to Roza for providing excellent background information on Tess Martin’s significant contribution to the success of the whole. JLH (8/11/21)

Featured Photo: A still from an animated sequence set to “The Little Town Where Papa Came From” | Fiddler: Miracle of Miracles (2019)

1.) Another still from an animated sequence set to “The Little Town Where Papa Came From” | Fiddler: Miracle of Miracles (2019)

2.) A still from the title sequence, featuring a violin | Fiddler: Miracle of Miracles (2019)

3.) A still from an animated sequence about a horse, later cut | Fiddler: Miracle of Miracles (2019)

Director Clermont-Tonnerre Makes Room for Second Chances in ‘The Mustang’

Megumi Sasaki seeks nuance in ‘Whale of a Tale’

by Roza Melkumyan August 10, 2021
As a member of the FF2 Media team, Roza writes features and reviews and coaches other associates and interns. She joined the team as an intern during her third year of study at New York University. There she individualized her major and studied narrative through a cultural lens and in the mediums of literature, theatre, and film. At school, Roza studied abroad in Florence and London, worked as a Resident Assistant, and workshopped a play she wrote and co-directed. After graduating, she spent six months in Spain teaching English and practicing her Spanish. In 2019, she spent a year in Armenia teaching university English as a Fulbright scholar. She has continued to live in Armenia, and loves every second of it. Her love of film has only grown over the years, and she is dedicated to providing the space necessary for female filmmakers to prosper.
Previous Post Next Post