Historically, people watch the Super Bowl for one of two reasons. They are football fans, or they want to see the ads. Sometimes both. This year, we had a fresh and compelling motivation to tune in when Amanda Gorman became the NFL Championship’s first-ever poet.

Talk about winning the Super Bowl! The poet created “Chorus of the Captains” as an ode to three frontline workers who were named honorary Super Bowl captains. The poem lauds Los Angeles educator Trimaine Davis, Marine veteran James Martin, and Florida ICU nurse Suzie Dorner, who performed the opening coin toss, for their extraordinary leadership during the Covid-19 pandemic.  Once again Ms. Gorman captivated the nation and proved last month’s inaugural triumph was no fluke. Social media gushed with admiration, just as it had a few short weeks before.

My social feed on Inauguration Day felt like one of those coordinated campaigns to make Facebook fun again, despite politics and Covid. A vaccine was on the way. We’d survived the election, claims of voter fraud, and a stunning assault on our Capitol. Finally, it was time for… Amanda Gorman!

Her image – radiant, poised, expressive – dotted my feed in sunbursts of vivid yellow. That coat! Those braids! That poem!

We did not need to be critics or even fans of poetry to know “The Hill We Climb” was something extraordinary. My friends were generous with their praise. Poignant. Inspirational. Mesmerizing.

Then, one Facebook friend burst my Amanda Gorman bubble of bliss by proclaiming the poem “bad.”

This self-proclaimed “word guy” in my journalism school cohort (where we are all “word people”) said, in a public Facebook post, the poem “wasn’t all that,” an opinion to which he is certainly entitled. If he had stopped there with his stance and the reasons for it, I likely wouldn’t still be perseverating.

And by the way, I re-wrote that damn poem as a friendly way to illustrate what I mean. Show of hands: Who wants to read both versions and compare them?

A white, septuagenarian male took it upon himself to edit the work of a 22-year-old woman of color with life experiences far different from his or mine. That doesn’t seem friendly or illustrative to me. It seems hostile. I saw no raised hands, and, privately, I explained I would not be taking him up on his offer to read the revised poem.

I asked him to consider the optics and appropriateness of someone of his privilege going after Miss Gorman’s work — or anyone’s art for that matter — with a red pencil, unbidden. He is not a professional poetry critic. He is neither her editor nor her mentor. She didn’t ask him to “fix” her poem.

He insisted neither his nor the poet’s “shape, form, color, or life status” had anything to do with it and that it was merely an academic exercise. However, I’d call it mansplaining or, better yet, patriarchal pontification.

Honestly, I don’t know for sure how, or if, race or age or gender played into this, and his insistence that they didn’t may very well be true. But can we afford not to ask ourselves what inherent biases we bring to our opinions and actions? The words he used in his defense – shape, form, color, or life status – felt flippant and trivializing. Words are power and, by editing Ms. Gorman’s work, he took away her power. He was, in fact, so dismissive that he went on to send me his edited version of “The Hill We Climb” anyway after I told him I wasn’t going to read it, but not before he informed me that the poem “sucked.”

I am neither a lexicographer nor a poet. I am a white, middle-aged, middle class, cis woman who owns a paltry seven poetry books, eight if you count the well-worn collection of Shakespeare’s Sonnets my sporadically romantic father once gave my mother for Valentine’s Day. One small volume is Maya Angelou’s “On the Pulse of Morning,” which she recited at the Clinton inauguration in 1993.

My acquaintance admitted he would’ve preferred someone like JFK’s inaugural poet, Robert Frost: “Now there was a Poet Laureate.” His jabs at Miss Gorman’s poem were many. Too cute. Too derivative. Too many words – reminiscent of the film Amadeus when the emperor tells Mozart his work has too many notes. A made-up and nonsensical word: “glade” as a verb. Good for you, Amanda! Isn’t language living, breathing, and evolving? All the time, according to Erin McKean, a lexicographer, and creator of the online dictionary Wordnik. In a 2014 TED Talk, McKean actually encourages her audience to make up new words whenever possible. After all, the dictionary is full of words other poets and authors have made up along the way.

“I wonder what he’d say about Jabberwocky,” posed a dear friend who’d memorized the Louis Carroll poem in the 7th grade.

Maybe it’s easier to attack someone else’s work than to create one’s own. Or not. New York Mag art critic Jerry Saltz recently took a lot of heat on Twitter after saying, “A good critic always puts more into writing about artwork than the artist put into making it. The artist only creates.” Only? Another proclamation from the patriarchy? Saltz has since walked back what he called a “galactic gaff” after disagreement from legions of creatives, including author Roxane Gay. I wonder if my pal will ever do the same. So far, he is mum on the Super Bowl poem, although he did do some eye-rolling in the run-up to the event.

Speaking of older white guys, Shakespeare is said to have invented the words “swagger” (“Midsummer Night’s Dream”) and “critic” (“Love’s Labour Lost”). Chaucer, who was also a prolific word coiner, is credited with being the first to use the word “twitter” (“The Canterbury Tales”), but I dare say he never imagined people on social media arguing over poetry. If Carroll, Chaucer and Shakespeare could play with language— indeed enrich language— by creating new words, why not Amanda Gorman? Why not any of us? 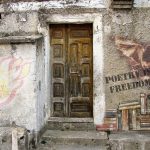 Mary Novaria is a Colorado-based writer and editor whose essays have appeared in the Washington Post, O The Oprah Magazine, Spirituality & Health, and elsewhere. She also writes about family, friendship, and everyday life at www.marynovaria.com.

‘Yellow is Forbidden’ peeks into fashion house of Guo Pei

by FF2 Guest Post February 12, 2021
FF2 Media welcomes Guest Posts from writers who self-identify as women. Do you have a passion that you want to write about? Send us a pitch: witaswan@msn.com. We pay experienced writers $100 for each post (of approximately 1,000 words per post). We also need interns for administrative back-up. Compensation for interns begins at $15 per hour.
Previous Post Next Post