Glorious 4G release of “Howards End” is a joy!

So I happened to be at a morning screening for film critics at the Film Forum in NYC last Thursday, and when I emerged from the Ladies Room afterwards (at around 12:10), I saw that a screening of the new 4G Silver Anniversary Restoration of Howards End was about to begin. Since this was the last day I would be able to see it at the Film Forum on a Big Screen, I thought “what the heck,” and I stayed.

I am so glad I did! I am delighted to report that Howards End at 25 is not just glorious, it’s actually better than ever.

Howards End was nominated for NINE Oscars in 1992, it won THREE, and each and every one of them went to a woman!!!

I say it was better than ever in 2016 because I was watching it in the third and final act of Hillary Rodham Clinton’s barrier-busting run for President of the United States of America. And so, when “Margaret Schlegel” (Emma Thompson) says to her fiance “Henry Wilcox” (Anthony Hopkins) “Can you not forgive Helen as I have forgiven you? Can you not say: ‘What Helen has done, I have done.’” Well, I literally broke down in tears! 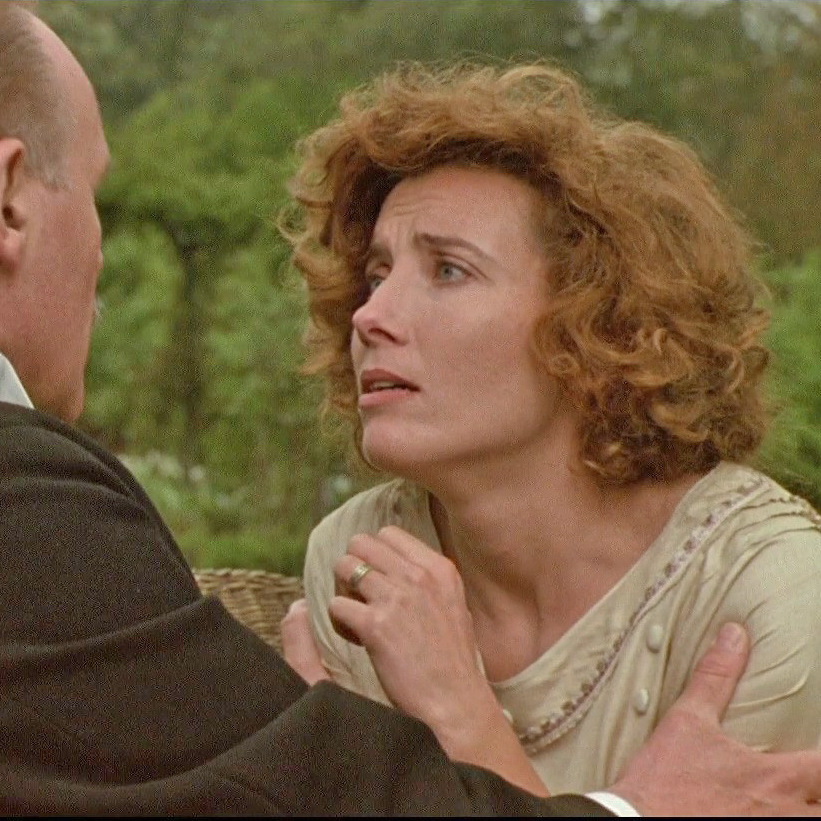 For those who have neither seen nor read Howards End, let me provide a smidgen of context. Howards End is the name of an English country home owned by “Ruth Wilcox” (Vanessa Redgrave).

Ruth Wilcox is a wealthy lady of the late 19th Century. Margaret Schlegel and her sister “Helen Schlegel” (Helena Bonham Carter) are ladies of the early 20th Century (not quite so wealthy, but certainly well-to-do). Nevertheless, when Ruth Wilcox and Margaret Schlegel meet up “on the Continent” (meaning somewhere in Europe) while on vacation, they are immediately sympatico. Months later, finding themselves alone in London just before the holidays, they bond over Christmas shopping and other ladylike pursuits. In the course of their conversations, Ruth tells Margaret a great deal about her love for Howards End, and she almost manages to take her there for a look see… but fate intervenes.

On her deathbed, Ruth writes a note leaving Howards End to Margaret. When he finds the note, Ruth’s husband Henry destroys it. Nevertheless, he is intrigued by Margaret, and slowly but surely, he comes to understands why his wife was so smitten with the young–but actually not so young–woman. Henry proposes and Margaret accepts. (Me? I would have given Emma Thompson an Oscar for this one scene alone!) Complications? Complications abound!!!

That’s enough plot! Howards End is the pinnacle of an extraordinary cinematic collaboration that is always, always referred to as Merchant Ivory Productions. And it is true that director James Ivory and producer Ismail Merchant (who died in 2005) had a unique personal and professional relationship. However, almost all of their films–and every single one of “their” most aesthetically and commercially successful films–were penned by screenwriter Ruth Prawer Jhabvala. Now really, folks: In a just world, these films would be known as Merchant Ivory Jhabvala Productions. Right? Of course, right!

So watching Howards End in 2016 is bittersweet.

Sweet because Ruth Prawer Jhabvala (who died in 2013) is one of the only women in history to win not one but two Oscars for her screenplays (both, of course, for “Merchant Ivory” productions). Sweet because Howards End holds up so well on screen after twenty-five years. Sweet because women really have come so far since the dawn of the Suffragette movement. (There is actually a lovely scene in which Margaret has to shoosh her friends when Ruth chimes in–in the middle of a lively discussion after an elegant luncheon–to say that she does not believe in women’s suffrage.) Bitter because with all of her qualifications, Hillary Rodham Clinton still has to fight so $#@%ing hard for her right to campaign for the top job.

If she were here today, I feel sure that Ruth Prawer Jhabvala–who lived the last part of her long life in Manhattan–would be voting for HRC on November 8th… so I will do it for her in her honor. 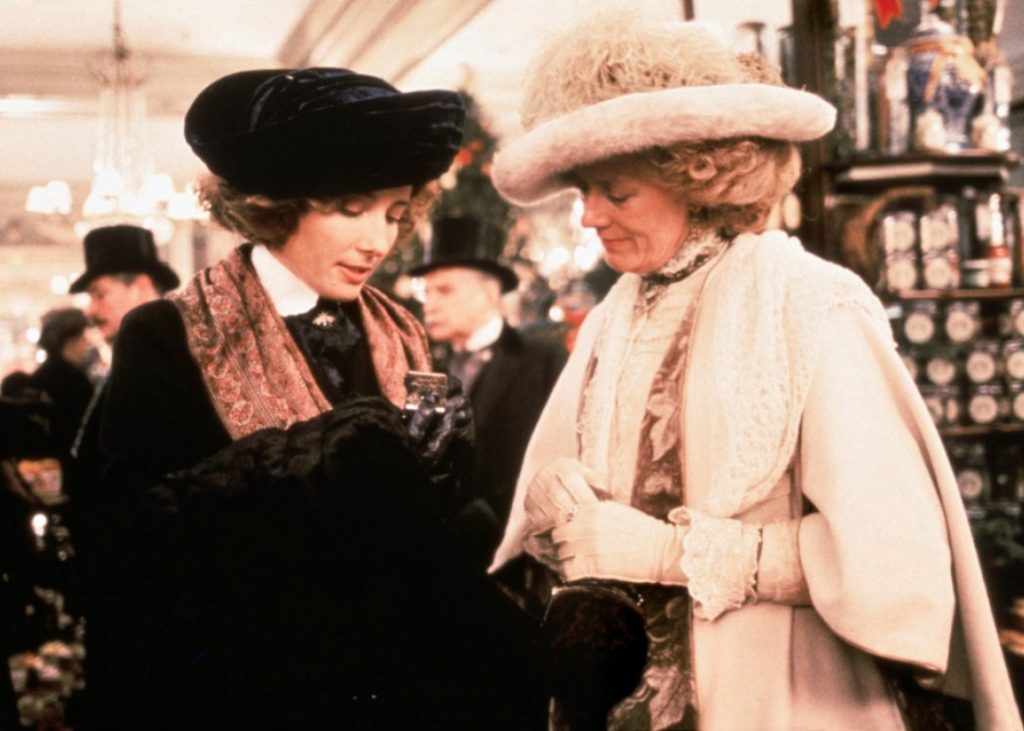 In addition to the conversations that Ruth and Margaret have about Howards End (d’uh!)–not to mention Christmas shopping–Margaret, Helen, and their friends (most of whom are women) discuss politics, culture, and other highbrow topics of the day.

The Wilcox women–specifically daughter “Evie” (Jemma Redgrave)  and daughter-in-law “Dolly” (Susie Lindeman)–fret about Margaret and her increasingly intrusive role in their tight family circle. Meanwhile, Margaret and “Aunt Juley” (Prunella Scales) are in a panic when Helen suddenly disappears at the beginning of Act Three.

Yes, yes. Of course, there are several terrific male roles in Howards End beyond Anthony Hopkins perfect turn as Henry Wilcox–especially Samuel West’s poignant performance as Leonard Bast–but the core of this film is about women. Hooray 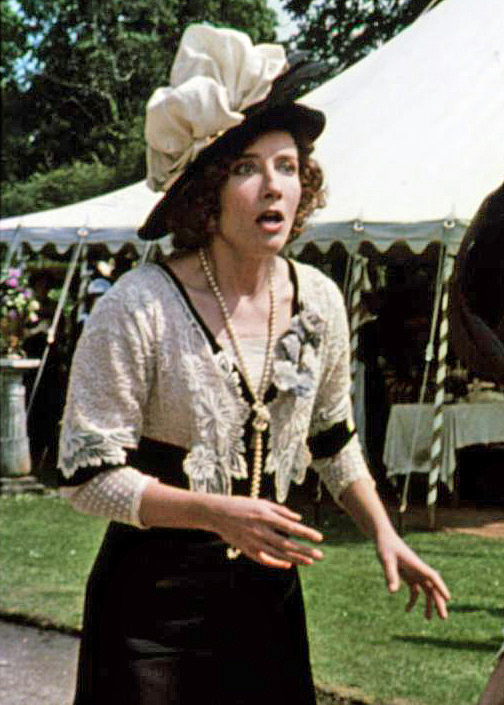