According to Chief Curator Stephanie Smith: “Feast is emblematic of the larger trend of blurring art and life—art that moves beyond the space of the museum.” In this case, while “calling attention to larger social and political issues,” Smith said, “the boundaries of what constitutes ‘art’ have expanded [to include] meals as a material for art.”

In his Enemy Kitchen project, for example, Rakowitz (whose grandfather fled from Iraq in 1946) asks Iraqi immigrants to cook some of his mother’s favorite recipes with him. American veterans of the Iraq War then act as servers, using paper plates modeled on Saddam Hussein’s china! 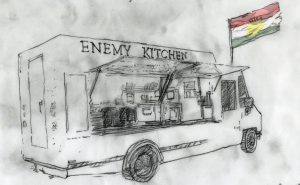 According to his website (http://MichaelRakowitz.com): “The project functions as a social sculpture: while cooking and eating, we engage each other on the topic of the war and draw parallels with our own lives.”

Prior to Feast, Rakowitz’ work has appeared in worldwide venues including Innsbruck, Istanbul, Paris, San Francisco, Sydney and Torino, as well as MoMA (New York). But, says Smith: “This is the first time Enemy Kitchen has been part of a public project and not just a private workshop.”

Skokie Public Library is currently hosting a national traveling exhibit called “In a Nutshell: The Worlds of Maurice Sendak.” Born in 1928, Sendak was raised in Depression-era Brooklyn. Both of his parents were Polish immigrants and as the SPL website notes: “threads of Jewish family, geography and culture are woven through the more than 100 picture books he illustrated.” 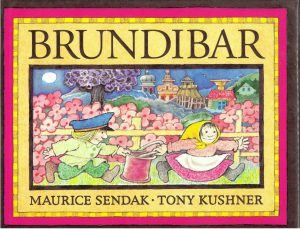 Although I love Sendak’s work (especially Brundibar, his collaboration with playwright Tony Kushner), I haven’t made it up to SPL myself yet. But the exhibit comes highly recommended by my friend Alan Todres (a member of the Chicago YIVO Board): “not least for the influence of Yiddish language and culture on the author/artist.”

In addition to the many events planned in connection with the exhibit, SPL will show the documentary short Tell Them Anything You Want: A portrait of Maurice Sendak on Weds, Feb 15 at 7 p.m. Tell Them Anythingwas co-directed by Spike Jonze, who also directed the lovely award-winning adaptation of Where the Wild Things Are starring James Gandolfini (named one of the top ten films of 2009 by the National Board of Review).

Award-winning Israeli jazz violinist Miri Ben-Ari will headline a fund-raiser at Lincoln Hall on Thurs, Feb 9 at 8 p.m. The beneficiaries are the American Friends of the Israel Sport Center for the Disabled, the American Friends of Magen David Adom, and the Anti-Defamation League. I love Miri’s CD The Temple of Beautiful,so I will definitely be there. Look for more details next month. Meanwhile to order tickets for yourself, visit: www.afiscd.org/mirichicago. 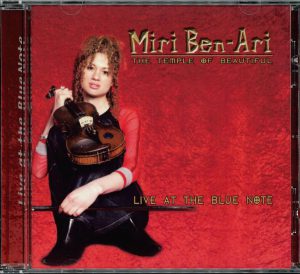 At the Art House

One of the oddities of this year’s Award Season was a late-breaking critics’ push for Margaret in mid-November. Margaret played here (and in a few other metros) in October, but busy as I was with film festivals, I didn’t see it until December (at a Chicago Film Critics Association screening). Now the Gene Siskel Film Center is bringing it back for another “special run” beginning Feb 17.

Written and directed by playwright Kenneth Lonergan (whose first film was the much-loved Indie You Can Count on Me starring Laura Linney and Mark Ruffalo), Margaret is the story of a troubled high school student named “Lisa Cohen” (played by Oscar-winning actress Anna Paquin). Without going into either a detailed plot synopsis or an overview of Margaret’s controversial history (as it was edited down from the 3-plus hour “Director’s Cut” to the version released in theatres), I must tell you that I left the CFCA screening literally shaking with rage. Even giving Lonergan the benefit of the doubt and assuming much was lost in the editing process, rarely have I seen such despicable caricatures of Jewish women on screen—terrific actors, yes, but horribly misused. 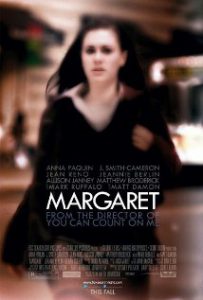 For tickets, visit the GSFC website: www.SiskelFilmCenter.org. To read my full review, visit: www.SecondCityTzivi.com. To read the Gerard Manley Hopkins poem Lonergan invokes in the title (“Margaret are you grieving”), visit: http://www.bartleby.com/122/31.html.

by Jan Lisa Huttner February 1, 2012
Jan Lisa Huttner is a Brooklyn-based arts critic & feminist activist. She is the creative force behind the SWAN Movement—Support Women Artists Now—which has just begun its third phase as International SWANs® (aka iSWANs). In the Jewish world, Jan is best known as the author of two books on Fiddler on the Roof—Tevye’s Daughters and Diamond Fiddler—both of which flow from a strongly feminist POV. She also served as both story consultant and “talking head” on the award-winning documentary Fiddler: A Miracle of Miracles.
Previous Post Next Post