Tzivi’s Guide to the 2011 Chicago Festival of Israeli Cinema

Despite deep fissures within and turmoil all around (or maybe precisely because of them), Israel continues to send forth an astonishing number of high quality films, many of which have received multiple awards at competitive festivals all around the world.

Sometimes laughter is the best medicine, and this year, in addition to heart-rending dramas and melancholy coming-of-age stories, our CFIC has comedies: two knee-slappers (Lenin in October and This is Sodom) and one near-miss (Qassamba). In The Schwartz Dynasty (my favorite feature from CFIC ’06), Tal Friedman and Dov Navon provided comic relief as a moshavnik seeking a Knesset seat faced off against the moshav’s top bureaucrat. In This is Sodom, Navon is Lot and Friedman is “Mrs. Lot.” Once again, Navon’s sad-sack grounds Friedman as he flies higher and higher over the top. Meanwhile Vladimir Friedman, who adeptly walked the razor’s edge between pathos and farce in The Schwartz Dynasty as a Russian surgeon turned Israeli grocer, is a hoot as a fervently political sculptor hired to adorn a new Ashdod restaurant in Lenin in October.

Tamar Alkan makes an unforgettable screen debut as “Fania” in Gei Oni (Valley of Fortitude). Fania is a refined young woman who arrives in Turkish Palestine circa 1910 traumatized by the Ukrainian pogroms which decimated her family. Moving to a settlement near Sfat, she must build a new life for herself while coming to terms with her past. Gei Oni, directed with epic scope and historical precision by Dan Wolman, was named Best Picture at the 2010 Jerusalem Film Festival.

Adir Miller had a small but significant role in The Secrets (which I praised in my Guide to CFIC ’08); this year he emerges from the background with a powerful leading performance as “Yankele Bride” in The Matchmaker (the part that brought him a Best Actor award from the Israel Film Academy last year). Perhaps you already saw The Matchmaker courtesy of the Chicago International Film Festival folks? If not, you absolutely should not miss this second opportunity.

Yossi Madmoni, who has been a force behind-the-scenes in Israeli television since the mid-90s, now conquers the big screen with Restoration, winner of the World Cinema Screenwriting Award at this year’s Sundance Film Festival.

My top pick in the Feature category this year is Restoration, a seemingly straightforward drama with deep resonance that is graced by two extraordinary performances.

Sasson Gabai (now internationally recognized as the beloved “Lieutenant-Colonel Tawfiq Zacharya” in The Band’s Visit), stars as “Yakov Fidelman,” co-owner of a small second-hand shop in Tel Aviv. For years, Fidelman’s partner “Malamud” bought used pieces of furniture and brought them back to Fidelman for repair, but now Malamud is dead, and Fidelman’s son wants him to sell the shop (more valuable for the land beneath it than for anything inside). The neighborhood is in the midst of gentrification, so why not take the money on offer and retire?

In walks “Anton” (Henry David) one day, and even though his carpentry skills are minimal, Fidelman hires him anyway, setting off a tense series of intergenerational confrontations. Inevitably secrets are revealed on both sides, but obliquely and with great restraint.

Tel Aviv, which recently celebrated its centennial as a world-class metropolis, is no longer the city of its founders. Which treasures will be salvaged and what might be lost forever in the crush of modernity?

My top pick in the Documentary category, Zubin and I, is also a subtle story of generational change, and once again music plays a central role. Although Zubin and I is one of the thirteen new programs in the “Cultural Heroes” series created for Israel’s Channel 8, distributor Ruth Diskin tells me it’s the only one in which the filmmaker lays out parallel tracks, counterpointing his hero’s story with elements from his own family narrative.

Director Ori Sivan is the grandson of Klaris Sarvas, the Israel Philharmonic Orchestra’s first harpist. Sarvas played in the days of Arturo Toscanini and Leonard Bernstein, so she never worked under Mehta’s baton, but her intimate knowledge of the demands of classical music intrigue her grandson and enable him to probe into Mehta’s life with singular depth. Zubin and I concludes with a performance of Gustav Mahler’s last symphony, and when the credits rolled, my face broke into a smile beneath the flow of tears. “Of course!,” I said to myself, suddenly remembering that Sivan is one of the creators of B’Tipul and its American version In Treatment (one of HBO’s most acclaimed current series).

I have already mentioned Tamar Alkan’s debut as “Fania” in Gei Oni (my Best of Fest Actress this year) and the interplay between Sasson Gabai and Henry David (Best Actor and Best Supporting Actor for their roles in Restoration).The remaining member of this year’s top quartet is Orly Silbersatz who transforms herself from the sympathetic mother of Broken Wings and Lost Islands into the mother-from-Hell in Intimate Grammar.

Hell is never described in Intimate Grammar, just repeatedly invoked in the pointed references to “there,” which are only explicit when her nemesis (poignantly played by delicate Evelyn Kaplun of Yana’s Friends and Dear Mr. Waldman) is listening to radio broadcasts of people searching for relatives lost in the Holocaust. Silbersatz’s “Hinda” is a monster who terrorizes her family, and yet in the sensitive hands of writer/director Nir Bergman, she’s the very embodiment of the complex honorific “survivor.”

And here is my personal ranking of recommended films on this year’s schedule: 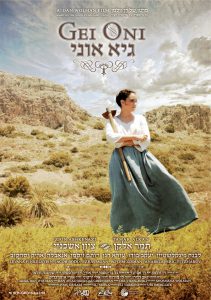 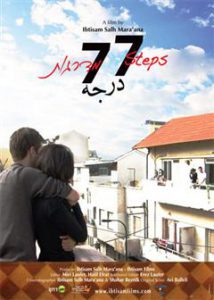 An Article of Hope

Reminder: Language is often the best clue you have to a character’s full identity, so you must always listen carefully as you watch Israeli films. Most often the characters speak Hebrew, of course, but some of the characters in this year’s films also speak one or more of the following: Arabic, Romanian, Russian, Turkish, and Yiddish. Today’s Israelis continue to live in a rich multicultural stew, and sometimes their slang is even in English!

CFIC ’11 opens Weds Oct 26 at the Chicago Cultural Center with a 7 PM screening of Mabul. Thurs Oct 27 screenings at Columbia College Chicago include Maya, 77 Steps, Strangers No More, and This is Sodom.After a break for Shabbat, city screenings continue on Sat Oct 29 at AMC 600 North with Intimate Grammar, Restoration and The Human Resources Manager.

Suburban screenings begin the next night (Sun Oct 30) at the AMC Northbrook Court, and continue every night through Fri Nov 4. After another Shabbat break, the festival concludes with a full weekend schedule that ends with another screening of Mabul at 8:30 PM on Sun Nov 6.

Brochures have been broadly distributed to many metro synagogues and meet-up spots, and all information is available online at: http://ChicagoFestivalOfIsraeliCinema.org/