During the final days of World War II, Psychology Professor David Boder of the Illinois Institute of Technology began petitioning the US State Department for permission to enter Displaced Persons camps to interview Jews about their Holocaust experiences. Boder finally reached Europe in July 1946, where, using bleeding edge technology (for its time), he captured 118 sessions with a wire recorder.

Back in his Chicago classroom by October, Boder had transcripts typed up which he personally translated into English. He published a book with eight interviews and mimeographed dozens more which he mailed to libraries. Boder persisted for years, with minimal funding, but almost no one cared. Ironically he died of a heart attack in December 1961—one week after Adolph Eichmann was convicted of crimes against humanity in a Jerusalem courtroom.

In the intervening years we have been inundated by survivor testimony, but as a trained psychologist, Boder worried that it was already too late to obtain the immediate input he was after. As IIT archivist Ralph Pugh told me: “Even though Boder’s interviews are the earliest comprehensive interviews, they already reflect a selective removal for self-preservation.”

On Weds June 22, Pugh and Professor M. Ellen Mitchell (Dean of IIT’s Institute of Psychology) will present an overview of a newly enhanced website which provides access to digitized versions of all of Boder’s original recordings. Each interview now has an English transcript, and almost all of them have original language transcripts as well. The website also contains collateral material prepared by contributing scholars including Alan Rosen and Donald Niewyk, plus Elliot Lefkovitz of Spertus Institute. 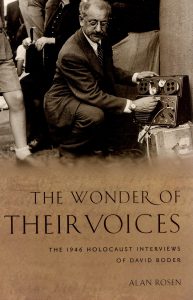 For more details about the 6/22 program scheduled for 6 PM at Harold Washington Library Center in the Loop, visit: www.ChicagoYivoBlog.com. To access the website, visit: http://voices.iit.edu. Read more about Boder in Rosen’s book The Wonder of Their Voices: The 1946 Holocaust Interviews of David Boder.Transcripts are also available in Niewyk’s book Fresh Wounds: Early Narratives of Holocaust Survival.

Beginning in 2006, when Illinois created a commemorative day named for Jane Addams, I’ve been continually surprised by all the forgotten links between Addams and Chicago’s Jewish community. Addams pops up again as a major player in the sad tale of Lazarus Averbuch, a Jewish immigrant supposedly killed in self-defense by Chicago Police Chief George Shippy in 1908. When investigators tried to bury inconvenient evidence, Addams “convened a group of social activists and concerned Jews who weren’t sure they wanted the case to be closed yet.” So says Joe Kraus in An Accidental Anarchist, the fascinating book he co-authored with Walter Roth in 1998.

Kraus (who now teaches at the University of Scranton) will return to Chicago to present “An Accidental Anarchist: How I Got Drawn into the Lazarus Averbuch Affair” at Spertus Institute on Sun June 12. To purchase tickets, visit http://www.spertus.edu. 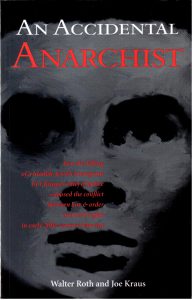 On May 15, Vivian Jacobson (who currently lives in North Carolina) gave a series of talks related to her new book Sharing Chagall. I attended the morning session at Beth Hillel Congregation Bnai Emunah in Wilmette and quickly fell under Jacobson’s spell.

As she tells it, her life changed forever on September 29, 1974, when Marc Chagall came to dedicate his new mosaic on Dearborn (in front of what was then the First National Bank of Chicago). She organized a small reception for him on behalf of local Hadassah members and although their conversation started in French, they quickly discovered a shared knowledge of Yiddish (“I believe this was the moment that our friendship began.”). One year later, Jacobson was the leader of a new organization called “the American Friends of the Chagall Biblical Message Museum,” and from that point until Chagall’s death in 1985, she worked tirelessly with him to raise funds for new works including the Job tapestry commissioned by our Rehabilitation Institute of Chicago.

Jacobson’s Chagall was not only a great artist, but “a great advertising and marketing executive” who played a conscious role in drawing people to his work. During the Q&A, one gentleman asked why Chagall had created so many stained glass windows for churches. Jacobson’s response: “Chagall was waiting for the Jewish people to come to him after World War II, but that wasn’t a time our money went to art.” For her this helps explain why the commission for the world-famous windows at Hadassah Hospital in Jerusalem (dedicated in 1962 as part of Hadassah’s Golden Anniversary Celebration) was so personally meaningful for him.

To read more about Jacobson, visit: http://www.juf.org/news/arts.aspx?id=74103. To order your copy of Sharing Chagall, visit: www.VivianJacobson.com.