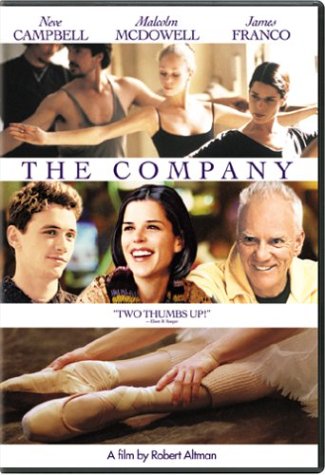 The DVD edition of Robert Altman’s 2003 film “The Company” will be released by Sony Pictures Classics on June 1st.

Meanwhile, due to local interest in the film, Chicago’s Joffrey Ballet added three works performed in the film to their Spring 2004
schedule. The new program was called “THE COMPANY: Favorites,” and it included “Tensile Involvement” (the Alwin Nikolais piece with the enormous elastic ribbons which runs behind the film’s opening credit sequence), “White Widow” (the Moses Pendleton solo performed on a swing to a haunting score by Angelo Badalamenti), and “Creative Force” (the high energy ensemble number by Laura Dean in which dancers in bright red costumes trade partners to a hot Latin beat).

“We wanted to celebrate the success of the film here in Chicago by showcasing, live, several of the works seen in this splendid film,” says Joffrey Founder and Artistic Director Gerald Arpino on the Joffrey’s website.

The new program was shown at seven May performances at the Auditorium Theatre of Roosevelt University, concluding last week on May 16th.

In anticipation of the DVD release of “The Company,” REEL CHICAGO met with local actress Barbara Robertson, who plays “Harriet” in the film. Ms. Robertson, one of Chicago’s busiest and most acclaimed theatrical headliners, is always on the shortlist when successful New York productions such as “Angels in America,” and “The Goat” make their Chicago debuts. Last winter she scored rave reviews as Desiree in the Chicago Shakespeare Theater’s popular revival of Stephen Sondheim’s “A Little Night Music.”

RC: What is your role in “The Company,” Barbara?

Robertson: I play a character named Harriet. She’s always at the right hand of the director played by Malcolm MacDowell. In the film he’s called “Alberto Antonelli.”

RC: The Artistic Manager of The Joffrey Ballet is Harriet Ross. Is that who you’re supposed to be?

Robertson: Barbara Turner (the screenwriter) and I studied Harriet Ross, but we didn’t model my character after her personality. We were more interested in capturing her role with the Joffrey.

RC: How much of your part was specified in the shooting script, and how much of “Harriet” did you create together?

Robertson: I didn’t even see the script until we’d already begun shooting. Altman basically told me what he wanted me to do. That’s the way it usually is on a movie set. The instructions come through the director. Altman said to me: “If you really do your job right, no one will know that you’re acting.”

RC: What’s the difference, for you, between stage work and screen work?

Robertson: When you do a play, you feel the flow every time and you know how everything fits together. But in a movie the director puts the pieces together. You do different takes, and only the director knows how all the pieces fit.

For example, in one of my biggest scenes in the film, I’m talking to a young dancer name Justin. He’s just been pulled out of a number by the choreographer. Well, I wasn’t supposed to do that scene with Justin. One of the dancers was supposed to give “my” speech. But Altman decided to make a change. They called me in and I dropped everything and I did it.

RC: One question about “A Little Night Music,” Barbara, your character Desiree gets the play’s big number. You sing the famous song “Send in the Clowns” at the end of the second act. What is it like for you, knowing everyone in the audience is waiting for that song?

Robertson: I never worried about singing the song. I wanted people in the audience to feel the song on the context of the story. Desiree is a woman who has always relied on her sense of humor. But now she’s facing disappointment, so she’s struggling to retain her sense of humor. “Where are the clowns? There ought to be clowns.”

Barbara Robertson is currently appearing in “My Old Lady” at the Apple Tree Theatre in Highland Park. In addition to her private students, Ms. Robertson also teaches at Columbia College.

Jan Lisa Huttner is the Managing Editor of FILMS FOR TWO: The Online Guide for Busy Couples. Click here to read her complete interview with “The Company’s” screenwriter Barbara Turner.

Nicole Holofcener is a Master of Quick Wit and Emotional Resonance

by Jan Lisa Huttner June 16, 2007
Jan Lisa Huttner is a Brooklyn-based arts critic & feminist activist. She is the creative force behind the SWAN Movement—Support Women Artists Now—which has just begun its third phase as International SWANs® (aka iSWANs). In the Jewish world, Jan is best known as the author of two books on Fiddler on the Roof—Tevye’s Daughters and Diamond Fiddler—both of which flow from a strongly feminist POV. She also served as both story consultant and “talking head” on the award-winning documentary Fiddler: A Miracle of Miracles.
Previous Post Next Post